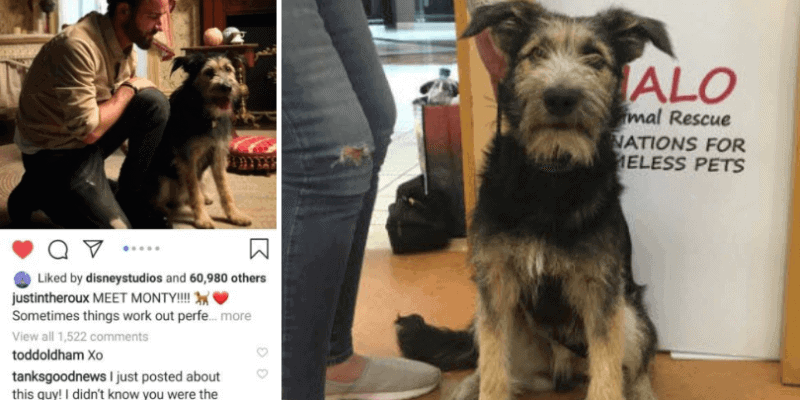 Justin Theroux, who lends his voice to Tramp in the new live-action remake of Disney’s “Lady and the Tramp” took to Instagram to gush about his affection for Monty, the canine who plays Tramp in the upcoming film, and to announce that his own pooch Kuma has a role in the upcoming movie.

“[Kuma] was given a really huge starring role (okay, it was teensy, but don’t tell her),” Theroux posted in his Instagram update from Sunday. He even posted a picture of his dog Kuma in the back of a cart labeled “Dog pound.”

Theroux quipped about his affection for Monty and Monty’s amazing story as a rescue dog when he asked fans to “Meet Monty!” Thoreux seems more than pleased with his role in the new film about Lady and her Tramp, but he sounds the most excited about the canine stars (and canine extras) cast in the movie.

“Sometimes things work out perfectly. PLEASE scroll through for HIS VERY very cool story,” Theroux added in his Instagram post. “Monty was rescued from @halorescue…an amazing NO KILL shelter in Phoenix, Arizona. He was found by @disney who was looking for shelter animals to cast in “Lady and the Tramp” in which there are tons of rescue dogs!”

Theroux went on to praise Disney for giving “so many dogs a big break,” not just by giving them roles in the upcoming “Lady and the Tramp” movie, but also by giving them a life outside of the shelter.

“And a huge thank you @ladyandthetramp for letting me be Monty’s voice so he can show the world how amazing shelter animals really are,” Theroux concluded in his post.

Monty and his co-star, a cocker spaniel named Rose who plays Lady, posed for pictures on the red carpet at the 2019 D23 Expo this weekend in celebration of their upcoming movie slated to begin streaming exclusively on the new Disney+ streaming service on November 12.

Are you planning to subscribe to Disney+ so you can see “Lady and the Tramp” when it’s released on November 12? Let us know in the comments below!