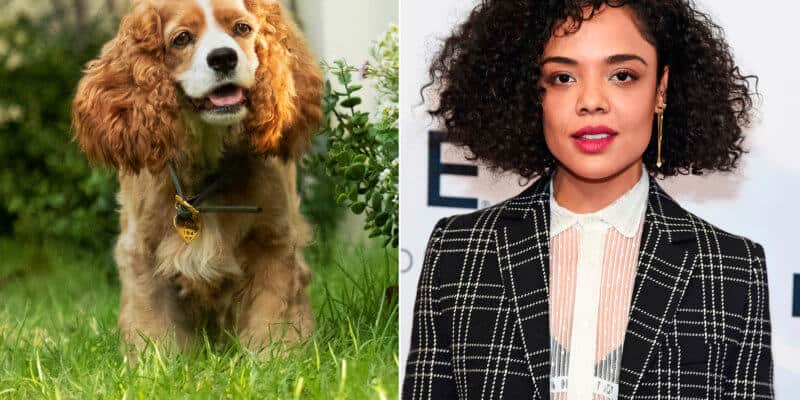 The premiere of Disney+ is approaching fast and as it gets closer, so does all of the beloved and all-new live-action and animated films from Disney’s massive collection of content. Within this lineup, is the brand-new live-action remake of “Lady and the Tramp,” which Disney just gave a first look at. And yes–we’re already drooling for more!

This exciting first look comes to People, who got the exclusive on all the real life rescue dogs that make up this beloved’s films all-new cast. As magical as Disney is, it is true that these dogs can’t necessarily speak on their own. However, we also have the actor’s portraying each character’s voice side-by-side so you can get a sense of what these characters will be like when the film premieres on the new streaming service.

From this new image, it’s safe to say this Cocker Spaniel named Rose perfectly captures the essence of the original Lady from the 1955 animated film. And Tessa Thompson, most famous from the recently released “Men in Black” reboot, will be lending her voice to the lovable dog.

Who better to portray the Tramp than this shaggy and friendly looking rescue dog named Monte? According to People, Monte was rescued from a kill-shelter in New Mexico by Halo Animal Rescue and then transferred to a shelter in Phoenix. Here is where he was adopted by one of the film’s animal trainers, Mark Forbes. Justin Theroux, who you may remember as the Master Codebreaker in “Star Wars: The Last Jedi” and from many other film and television roles will voice the friendly pooch.

Trusty, a major character from the original film and best friend of Jock will be brought to life by this adorable bloodhound. The sweet dog will be voiced by Sam Elliot, who you may know as the voice of Butch from Disney’s “The Good Dinosaur.”

This sweet and wooly canine will play Peg. And who better to supply this dog’s pipes than Janelle Monáe? For those not familiar, Janelle Monáe is an award-winning actress and musician and couldn’t be more perfect for the musical role.

For fans of the original film, you may remember this eccentric Scottish Terrier as a male character. However, in this new film the dog will be female and played by Ashley Jensen.

This lovable pooch will take on the role of Bull, Tramp’s bulldog pal. Benedict Wong, who you may remember from “Doctor Strange” will voice the dog.

What are your thoughts on these adorable dogs who will take on the roles of these beloved characters? Let us know in the comments below!