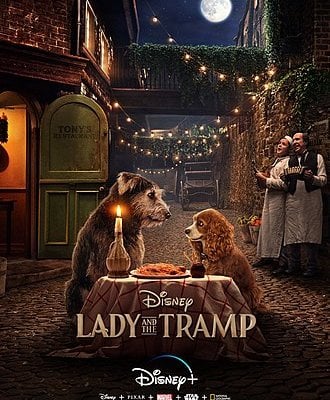 The newest trailer released for the upcoming live-action remake of Disney’s “Lady and the Tramp” will have you smiling–real smiles, not CGI smiles.

“Lady and the Tramp” will forgo a theatrical release and debut instead on the new Disney+ streaming service on November 12–the same day the service becomes available to the public. It will be the first of Disney’s live-action adaptations to do so.

The newest trailer to be released gives fans a look at several of the most loved and wondered about details in the film, including a first look at Aunt Sarah’s cats, Jim Dear and Darling, their adorable baby, and of course, the iconic spaghetti scene when Lady and Tramp share noodles, meatballs, and a little romance. Take a look:

Tessa Thompson lends her voice to Lady, while Justin Theroux will bring Tramp to dazzling life with his voice talents. The star-studded cast includes Sam Elliott as the voice of Trusty, Janelle Monae as the voice of Peg, Yvette Nicole Brown as Aunt Sarah, and the hilarious Ken Jeong.

In contrast to Disney’s remake of “The Lion King,” which made use of CGI animals, “Lady and the Tramp” features real canines with computer-generated lip movements to make the dogs’ conversations more believable and the adventures between them even more exciting.

The new live-action remake of the 1955 classic will also include the infamous spaghetti scene, which we’ve been hoping for, and even a few scenes of romance between the two lovable pooches who also happen to be canine rescues who became famous seemingly overnight.

The new film will debut on Disney+, so if you’re hoping to enjoy Disney’s newest remake, you’ll need to subscribe to the service that begins streaming on November 12. Visit the Disney+ website to sign up for your monthly subscription at $6.99 per month, or choose an annual subscription for $69.99 per year and save about $14.

Disney+ will have a full line-up of series, movies, original content and more. But “Lady and the Tramp” is one of the ones we are most excited to see!

Are you looking forward to Disney’s remake of “Lady and the Tramp?” Will you be subscribing to Disney+? Let us know in the comments below!