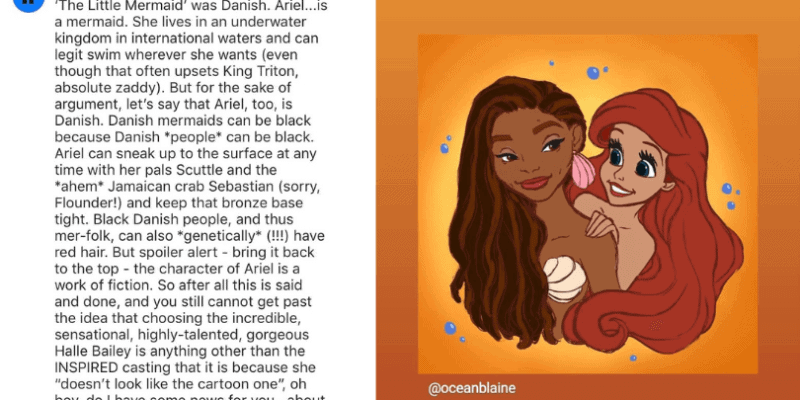 Disney announced last week that Halle Bailey, known for her role in “Grown-ish” and one-half of the R&B duo Chloe x Halle, will star as Ariel in the upcoming version of “The Little Mermaid.” While many fans and celebrities were happy to see Bailey take the lead as Ariel (especially considering what it means for representation in Hollywood), others weren’t at all pleased with Disney’s decision. After fans on all sides have shared their opinions of Bailey as the new Ariel, Disney has finally spoken out and defended the casting decision.

The statement is titled, “An open letter to the Poor, Unfortunate Souls,” a play on lyrics of a popular tune from the original film, and it draws upon logic, history, and even humor to make a case for Bailey’s casting. Disney also originally published the statement on the social channels for Freeform, the young adult television network with the slogan “a little forward.” The statement reads as followed:

Yes. The original author of ‘The Little Mermaid’ was Danish. Ariel…is a mermaid. She lives in an underwater kingdom in international waters and can legit swim wherever she wants (even though that often upsets King Triton, absolute zaddy). But for the sake of argument, let’s say that Ariel, too, is Danish. Danish mermaids can be black because Danish *people* can be black. Ariel can sneak up to the surface at any time with her pals Scuttle and the *ahem* Jamaican crab Sebastian (sorry, Flounder!) and keep that bronze base tight. Black Danish people, and thus mer-folk, can also *genetically* (!!!) have red hair. But spoiler alert – bring it back to the top – the character of Ariel is a work of fiction. So after all this is said and done, and you still cannot get past the idea that choosing the incredible, sensational, highly-talented, gorgeous Halle Bailey is anything other than the INSPIRED casting that it is because she “doesn’t look like the cartoon one”, oh boy, do I have some news for you…about you.

Fans have mixed feelings about Disney’s decision to cast Bailey as Ariel in the upcoming live-action reimagining of “The Little Mermaid.” And even though we’d never think the team behind the new film would recast the starring role, we were also pretty surprised to see Disney issue such a blunt response. Still, Freeform is known for using Instagram and Twitter to share progressive, conversational, and humorous takes on current events and its television shows and movies, so it would seem as though Disney thought the Freeform social media accounts would be the best channel to share this type of statement.

Take a look at a screenshot of Disney’s full statement below: 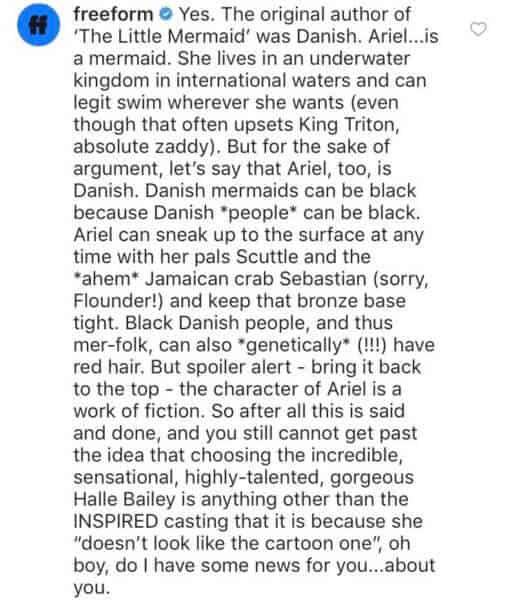 Even though this statement was issued days after the original casting announcement, Disney has stood by the decision from the start. Director Rob Marshall stated that Halle “possesses that rare combination of spirit, heart, youth, innocence, and substance — plus a glorious singing voice — all intrinsic qualities necessary to play this iconic role.” Still, though Disney announced the casting decision across virtually all of its social channels, the Disney-run account for “The Little Mermaid” called @disneylittlemermaid decided to delete the Instagram post, which some believe was due to the outpour of negative comments on the post.

What do you think of Disney’s defense of the decision to cast Halle Bailey as Ariel? Let us know in the comments!