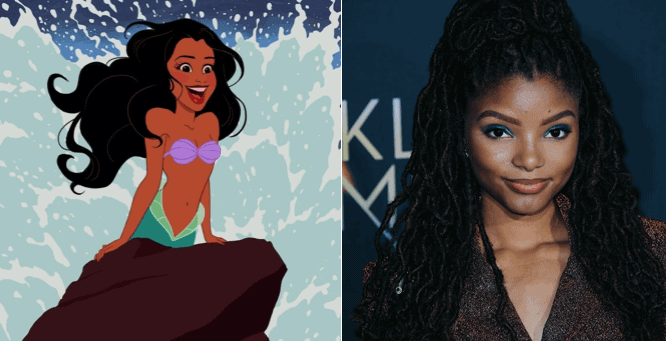 The internet erupted with fan reactions this week after Disney announced that Halle Bailey, known for her role in “Grown-ish” and one-half of the R&B duo Chloe x Halle, will star in the upcoming live-action remake of “The Little Mermaid.” While many fans and celebrities were supportive of Bailey and Disney’s casting decision, others took to social media to air express their frustrations with the announcement, even going so far as creating a hashtag. Here’s what fans are saying.

When it was first announced that Halle Bailey would play Ariel, several celebrities Tweeted out the news in excitement and support. From Mariah Carey to Halle Berry and Zendaya,

In case you needed a reminder… Halles get it DONE. Congratulations @chloexhalle on this amazing opportunity, we can’t wait to see what you do! #TheLittleMermaid #HalleBailey pic.twitter.com/z0Rik2nxRe

Congratulations Halle!! My kids and I are so excited for the emancipation of Ariel ??‍♀️ @chloexhalle https://t.co/6UwrduDQuc

Still, even despite celebrity support happiness surrounding the announcement, some weren’t happy. Thousands of people posted their reactions to the news on social media, saying that Bailey isn’t a good fit for the role because she’s not a redhead and claiming it isn’t racist to not want the actress to portray Ariel. Those upset with casting choice even went so far as to start a #NotMyAriel hashtag to express just how upset they were with Disney’s choice and call upon Disney to recast a white, redheaded actress as the star of the film.

The little mermaid was written as white, was white in the film, is based in Denmark and based on a European fairytale, but is cast as black… How is this not racist and cultural appropriation? If this were the other way round, those celebrating would be boycotting. #Ariel #Halle

Ariel must be a cute girl with white skin and red hair singing sweet and crisp!! Refuse her to become black!! If Ariel can turn into black skin, then I am equally qualified to ask Tiana to turn yellow skin!!#Ariel #ArielisBlack

@Disney You just ruined The Little Mermaid. Why is it so hard to be accurate with the original animated movie? I don't have a problem with the actress, but she doesn't look like Ariel at all. If u want more diversity, why don't you make new movies with new characters? #NotMyAriel https://t.co/WfqMjs0TV3

But it wasn’t long before Bailey’s supporters fired back, taking over #NotMyAriel on Twitter and using the hashtag as a way to call out racist comments against the casting decision.

"Ariel is black now, my childhood is ruined"
Girl pls some of us grew up with no representation/diversity at all. Imma need yall to chill with the #NotMyAriel tweets and get with the times. It's 2019 and anyone can be a princess.
Thanks for coming to my Ted talk. pic.twitter.com/XGBKpsv1dP

To anyone who thinks Halle won’t make a good Ariel just because she’s black, throwback to when Brandy absolutely killed it as Cinderella in the 90s ?? pic.twitter.com/cq0WVWo21F

she is literally the most realistic portrayal of Ariel we could have had. i’ll never stop celebrating this pic.twitter.com/rfXTgRfOrx

Putting this here. Halle Bailey is PERFECT and I’m SO EXCITED to see her as OUR Ariel ❤️ pic.twitter.com/jy6FDa0T50

I bet the people participating in the hashtag #NotMyAriel don’t know that Nick Fury was not black in the comics… but I bet they love tf out of @SamuelLJackson in that role…. give her a chance

A news flash to everyone using the #NotMyAriel grow up. pic.twitter.com/cwIozlOL0K

I thought the hashtag #NotMyAriel was gonna be a bunch of racist tweets but it’s a bunch of people clowning the racists ?? pic.twitter.com/KIzStJQZCn

Some even gave the subject a more lighthearted tone, pointing out the fact that mermaids aren’t actually real, so why should it matter if a black actress is portraying one in a fictional movie?

Racists demanding a white mermaid because all mermaids are white because mermaids are a real thing and are restricted by facts. #NotMyAriel pic.twitter.com/brDEp68enN

She's a mermaid Becky, they don't really exist, unlike your racism.

i just can’t ?‍♀️ accept halle bailey as ariel ??‍♀️❌ because it’s NOT accurate ? if you want to preserve ? our childhood memories ? you should cast an actual half-fish ???

People mad that Halle Bailey is playing the Little Mermaid because Ariel is a white chick with red hair, know that mermaids aren't *actually* real, right?

You know Ariel is fictional?

No matter how you feel about Disney’s decision, Bailey will be playing Ariel in the upcoming live-action reimagining of “The Little Mermaid.” We’ll have to wait two years until we get to be part of her world when the film hits the big screen, but that’s okay. We’ll just keep singing along to the original soundtrack and getting excited for the day when we can finally hear Bailey belt out our favorite Disney tunes.

What do you think of Disney’s decision to cast Halle Bailey in the new version of “The Little Mermaid”? Let us know in the comments!