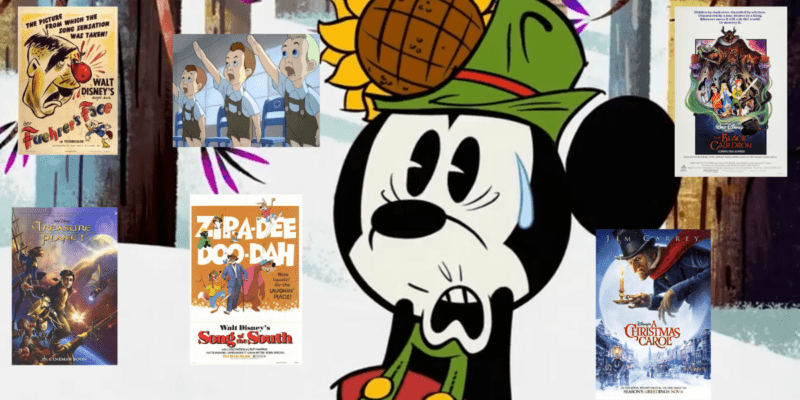 While most Disney films are beloved by all fans, the company has developed more than a few projects that are less than magical.

The Walt Disney Company has created timeless stories for nearly a century, bringing magic to life and into the lives of millions of fans worldwide, who have been moved and inspired by these stories for generations.

Related: Disneyland Will Be the Heart of The Walt Disney Company’s 100th Anniversary Celebrations

Characters like Mickey and Minnie Mouse, Donald, Goofy, Snow White, Belle, Ariel, Mulan, Pinocchio, Jiminy Cricket, Peter Pan, Alice, Simba, Aladdin, the Genie, Anna, Elsa, Tiana, Moana, and so many more have gained the praise and affection of fans for decades, and with many of these characters meeting Guests at Disneyland Resort, Walt Disney World Resort, Disneyland Paris, Hong Kong Disneyland, Tokyo Disneyland, and Shanghai Disneyland, the magic of Disney’s storytelling comes to life for the young and the young at heart.

However, not everything has always been magical for The Walt Disney Company, as there are more than a few projects that rack up a blacklist of Disney films and shorts that are not as promoted as other projects.

Before discussing the wrongs, let’s talk about the rights of The Walt Disney Company. From the very first shorts developed by Walt Disney Animation Studios, including Steamboat Willie (1928), Plane Crazy (1929), The Skeleton Dance (1929), Flowers and Trees (1932), The Band Concert (1935), Brave Little Tailor (1938), and so many more, The Walt Disney Company has innovated, improved, and excelled in the art of filmmaking.

Proof of this statement is the worldwide success of some of the latest Disney animated films, including The Princess and the Frog (2009), Tangled (2010), Frozen (2013), Zootopia (2016), Moana (2016), and Encanto (2021), which have inspired animated series, sequel films, Disney Parks attractions and character encounters, and even entire immersive lands at Disney Parks worldwide.

Disney has also developed several live-action remakes of its beloved classic stories, including Beauty and the Beast (2017), Aladdin (2019), Pinocchio (2022), and the upcoming adaptations of The Little Mermaid (2023) and Snow White (2024).

And with Disney acquiring Marvel Studios and Lucasfilm, adding the Marvel Cinematic Universe, the Star Wars franchise, and other IPs to its ever-expanding repertoire, the entertainment mogul continues to grow its offerings to reach fans of nearly every film gender.

Despite the massive success of The Walt Disney Company, not everything has been full of pixie dust, as there are more than a few less-than-magical projects that history will never let the company forget.

Perhaps the most discussed “mistake,” so to call it, in Disney film history is the 1946 film Song of the South. While the controversial film was considered a “Walt Disney classic” in its time, Song of the South has not aged graciously. Many believe the film perpetuates racist stereotypes and makes a shameful depiction of a person of color, Uncle Remus.

While the film may have seen as “appropriate” when it was released, society has changed, and much of what the film depicts, or fails to address, is no longer taken fondly by viewers.

A synopsis of the film reads:

Based on the Uncle Remus stories about the ingenious bunny Brer Rabbit using live action and animation. Following the separation of his parents, a young boy goes to live in the American South. There he meets Uncle Remus, who gives the boy valuable insights into his problems via the stories he tells about Brer Rabbit.

Song of the South is not available on Disney+, but a Reddit user recently shared that the controversial film was available on a “faith-friendly” streaming platform. You can read more about that story by clicking here.

Song of the South inspired the beloved Disneyland and Walt Disney World attraction Splash Mountain, which again brought the film to the spotlight when a complete reimagining was announced for Splash Mountain, turning it into Tiana’s Bayou Adventure, a new attraction inspired by The Princess and the Frog. The retheming was as polemic as the film that inspired the attraction, as many fans were excited to see Disney bring a new story to the ride, with several more upset about the change.

Some other works that are not as promoted by Disney are the company’s World War II propaganda. As requested by the United States Government, Walt Disney created a series of anti-German and anti-Japanese films for service members and the general audience in America, seeking to portray these countries and their leaders as manipulative and without morals. A few of the films produced by Disney during this period include Der Fuehrer’s Face (1943), Education for Death – The Making of a Nazi (1943), Commando Duck (1944), and Donald Gets Drafted (1942).

In Der Fuehrer’s Face, Donald Duck experiences a day in the life of a citizen of a Nazi country. The short depicts the ridiculous Nazi food rations with “fragrance of bacon and eggs,” coffee made with a single bean, and a slice of wood-like stale bread. Donald then works beyond exhaustion in a Nazi artillery factory, where he ends up hallucinating and breaks down. He wakes up realizing that the entire experience was a nightmare and embraces a model of the Statue of Liberty, exclaiming, “Oh boy! Am I glad to be a citizen of the United States of America!”

Der Fuehrer’s Face won the Academy Award for Best Cartoon Short Film, and the song featured in it became an anthem for the Americans of the era.

You can see Der Fuehrer’s Face below or click here to watch it.

Education for Death – The Making of a Nazi was a wartime propaganda film that follows the complicated life of Hans, a young German boy. The short film follows the story of Hans as he is raised in Nazi Germany with relentless policies and an education that decreases the ability to value human life, punishing the weak and planting the idea that pledging blind allegiance to Hitler is the way to live.

You can see Education for Death – The Making of a Nazi below or click here to watch it.

Again, while the depictions shown in these shorts were “appropriate” for the time and fulfilled the purpose they were commissioned to The Walt Disney Company, they would not be welcomed kindly by modern society.

While the productions mentioned above are to remain hidden due to their nature and political implications, several projects will forever be remembered as some of the biggest flops in Disney’s history. This is despite having a solid storyline, a great cast, stunning visuals, or even being treasured by fans as a favorite film.

Perhaps the most shocking flop is Treasure Planet, a 2002 Disney traditionally animated film which, despite being a fan-favorite to many, lost nearly $30M at the box office. Releasing with Harry Potter and the Chamber of Secrets hit the Disney film, which only grossed $110M after having a production budget of $140M.

The synopsis for Treasure Planet reads:

In a futuristic twist on Rober Louis Stevenson’s timeless tale, a secret map inspires a thrilling treasure hunt across the universe. Young Jim Hawkins and a hilarious cosmic crew, headed by the daring Captain Amelia, set off in search of their destiny. Aboard a glittering space galleon, Jim meets the ship’s cyborg cook, John Silver, who teaches him the value of friendship and the power of dreams. Jim soon teams up with his crazy new robot pal B.E.N, and the shape-shifting Morph to discover a treasure greater than he ever imagined.

You can click here to stream Treasure Planet on Disney+.

Another shocking flop was the 2009 Disney’s A Christmas Carol, which received harsh critics and a less than warm reception from viewers despite a star-studded cast that included Jim Carrey, Gary Oldman, Colin Firth, and Bob Hoskins. The synopsis for this take on the classic story reads:

Ebenezer Scrooge (Jim Carrey) begins the Christmas holiday with his usual miserly contempt, barking at his faithful clerk (Gary Oldman) and his cheery nephew (Colin Firth). But when the ghosts of Christmas Past, Present and Yet To Come take him on an eye-opening journey revealing truths old Scrooge is reluctant to face, he must open his heart to undo years of ill will before it’s too late.

You can click here to stream Disney’s A Christmas Carol on Disney+.

Despite having a decent fanbase, the competition also outperformed The Black Cauldron (1985). The dark film’s synopsis reads:

Fantasy, magic and fun are all brewed together in this legendary adventure. Whoever releases the mysterious Black Cauldron’s power will be invincible. The fearsome Horned King will do anything to possess it, but he is challenged by the most unlikely adversary; a young assistant pig keeper named Taran, who dreams of doing heroic deeds. With a motley team including brave Princess Eilonwy, a minstrel named Fflewddur Fflam and Hen Wen, a remarkable pig who can predict the future, Taran embarks on a quest to stop the Black Cauldron’s evil once and for all. Will he have the courage to succeed?

You can click here to stream The Black Cauldron on Disney+.

Whether it be with obscure films, box-office flops, or outdated depictions in their movies, Disney proves that not even one of the most important companies worldwide is perfect.

Did you know about these Disney flops and obscure productions? What do you think about them? Let us know in the comments below!