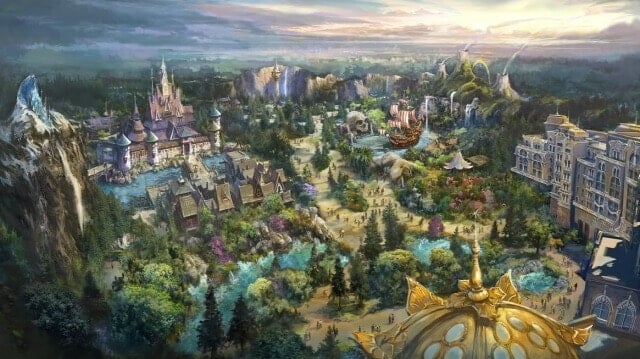 One of the most ambitious projects coming to Disney Parks is well underway with the first look at an all-new immersive land.

Disney blew fans away with all the announcements released during this year’s D23 Expo. From all-new details about the exciting opening of Tiana’s Bayou Adventure in 2024 to the first look at a massive Te Fiti statue that will look over The Journey of Water, a Moana-inspired attraction coming to EPCOT, including a brand-new area coming to Disneyland Paris inspired by Tangled, Peter Pan, and Mary Poppins, there is so much to look forward to on your next visit to Disney Parks worldwide.

One of the most ambitious Disney Parks projects currently in development is perhaps the opening of Fantasy Springs at Tokyo DisneySea in Tokyo Disney Resort. This highly immersive new land will be home to attractions inspired by Tinkerbell, Peter Pan, Frozen, and Tangled. The vehicles for these exciting new attractions were revealed at this year’s D23 Expo. You can read more about them by clicking here.

While seeing the vehicles each attraction will use when the land opens was already pretty exciting for many fans, a recent update will surely blow them all away.

Twitter user @disney_04150420 shared images of the significantly advanced construction of the land, showing the Neverland mountains from Disney’s classic film Peter Pan (1953), as well as a building inspired by Tangled (2010).

This user also shared some images of the luxury hotel being developed as part of Tokyo DisneySea’s eighth themed port.

Disney Parks Blog shared a few videos during the early development stages of this new land, describing it as follows:

Today, Tokyo Disney Resort debuted three videos showing parts of the exciting concept model of Fantasy Springs, a new themed port, which will open at Tokyo DisneySea Park in 2023. This will be the eighth themed port in Tokyo DisneySea, and it’s the largest ever since the opening of the park!

Fantasy Springs is scheduled to open in 2023, though no official date has been announced. We can’t wait to see all the magic this new expansion will bring to Tokyo DisneySea and Disney Parks worldwide, as international travelers will surely want to visit the new land once it opens.

Would you like to visit Fantasy Springs once it opens at Tokyo DisneySea? Let us know in the comments below!