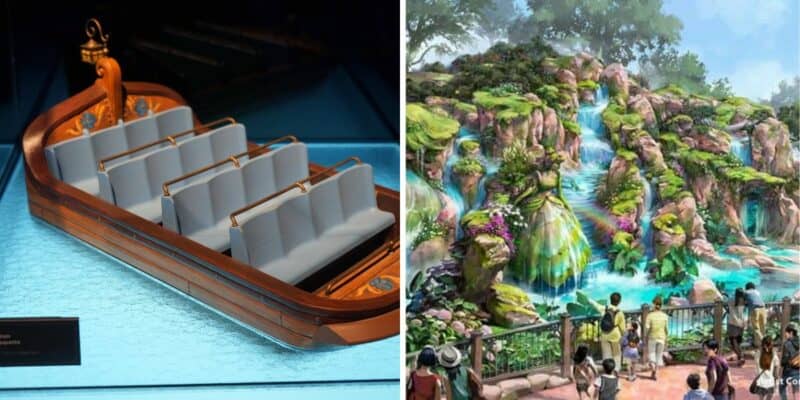 There are so many things going on across the Disney Resorts that it can sometimes be hard to keep up with. At Tokyo Disney, a massive expansion is taking place, one that will feature many of Disney’s most popular franchises.

With Fantasy Springs, Disney’s animated feature, Frozen, will come to life in an area designed to look just like Anna and Elsa’s Arendelle. This will be similar to the Frozen expansion that is currently underway at Disneyland Paris. Guests will travel across the bridge to take a closer glimpse at the castle and feel as if they are one of Arendelle’s residents.

Recently, at Disney’s D23 expo, the ride vehicles were revealed for the upcoming Frozen attraction. You can see the new boats in a tweet shared below by David Vaughn (@DavidVaughn) of Disneyland Tips:

Fantasy Springs will also include an ode to Disney fan-favorite, Tangled. Many Tangled fans will rejoice in visiting a new land that features Rapunzel’s tower adjacent to a gorgeous waterfall.

The final area in the Fantasy Springs expansion will be Peter Pan‘s Neverland. This will include Captain Hook’s ship and Skull Rock, among other locations. Ride vehicles for attractions in these sections were also revealed, and you can see them down below, thanks to a tweet from Matt Dobrovolsky (@darthvader92):

Tokyo DisneySea’s Fantasy Springs is set to debut in 2023. These 3D models will get any Disney fan excited, and we are looking forward to many more announcements regarding this gorgeous new DisneySea area! As a reminder, check Tokyo Disney Resort’s official website for more information!

What upcoming Disney project are you most excited about?