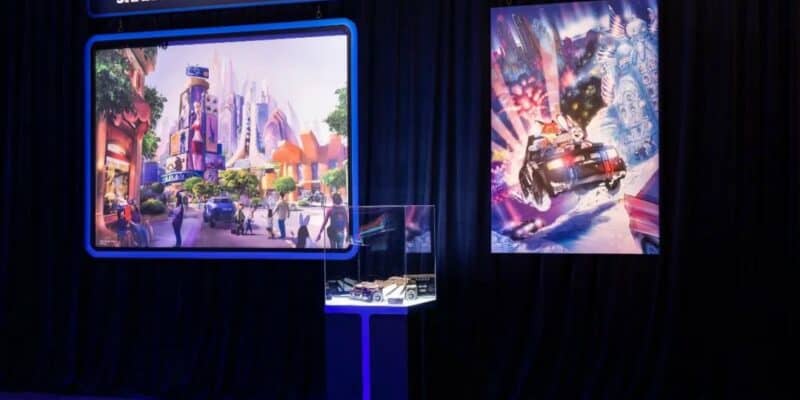 Since the expansion inspired by Disney Animation’s 2016 hit film, Zootopia began construction in 2019, fans of the movie have eagerly awaited for the land to open, seeing this highly immersive expansion slowly come to life at Shanghai Disneyland. The latest update was the addition of several skyscrapers to the land, which continued to shape this mammalian metropolis’s skyline.

Thanks to media previews from this year’s D23 Expo, we learned a little more about this future expansion and finally got a first look at the vehicle that will be used in the land’s attraction and a concept art poster of said attraction.

Disney Magical Kingdom Blog (@DMK_Blog) shared images of the scale model vehicle that will be used in the Zootopia-inspired attraction, as well as the poster for said attraction, and even a look at the different ways characters from this beloved film will be brought to life, including a couple of puppets that will interact with Guests in Shanghai Disneyland’s eighth themed land.

2022: #Disney fans and attendees from across the world at this year’s highly anticipated #D23Expo: The Ultimate Disney Fan Event, will have access to a sneak peek of exciting new details of #Zootopia, Shanghai Disneyland’s eighth themed land that is currently under construction.

2022: #Disney fans and attendees from across the world at this year’s highly anticipated #D23Expo: The Ultimate Disney Fan Event, will have access to a sneak peek of exciting new details of #Zootopia, Shanghai Disneyland’s eighth themed land that is currently under construction. pic.twitter.com/gLFyENq3z6

Based on the size and shape of the vehicle, we can be almost certain that the attraction will use Disney’s innovative trackless system, similar to the one used on Remy’s Ratatouille Adventure, Enchanted Tale of Beauty and the Beast, and Mickey & Minnie’s Runaway Railway. The vehicle resembles a Zootopia Police car. Based on the concept art poster for the attraction, Guests will most likely join Officers Judy Hopps and Nick Wilde on a thrilling adventure through Zootopia.

As of the publication of this article, no further information is available on the Zootopia-themed attraction. However, we will surely hear an official announcement during this year’s D23 Expo. Inside the Magic will update you throughout the weekend as Disney D23 takes place in California.

As part of the initial announcements of this highly immersive expansion, Disney Parks Blog shared these details about what Guests can expect:

Are you excited about Shanghai Disneyland’s Zootopia-themed expansion? Let us know in the comments below!