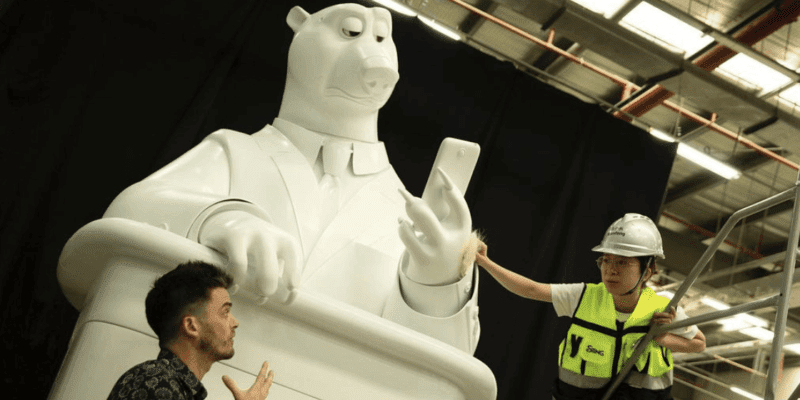 In 2019, Disney announced that it would be building a new Zootopia-themed land at the Shanghai Disney Resort. It would be the second-largest expansion to happen at the theme park since it opened in 2016. Zootopia fans were ecstatic when they heard the news.

While no opening date has been announced for the new land at this time, construction is moving full steam ahead and a huge amount of progress is being made. Most recently, Walt Disney Imagineers gave fans a glimpse at just some of what they can expect at Zootopia land with the first image of an absolutely stunning Audio-Animatronic.

Construction continues on the upcoming Zootopia-themed land at Shanghai Disneyland. Audio-Animatronics figures of some of the leading characters from the story, such as the three-meter-tall Polar Bear from Tundratown, are currently being developed at the show production center at @ShanghaiDisneyResort. This is the first time that Imagineering has built such complex Audio-Animatronics figures outside of the US. Additionally, the first tree of this new land was just planted, giving new life to the area in development.

With every new theme park land they build, Disney only seems to up their game — which is why they are always at the top. Most recently, a Spider-Man animatronic that could actually run, jump and flip in the air and land in another area made its debut at Avengers Campus at Disney California Adventure Park.

In late 2020, aerial views of the Zootopia area were shared on social media, showing the great progress that was being made in the area. Disney Parks Blog also spoke about what types of rides and experiences Guests will be able to have when they land finally opens.

Zootopia premiered in 2016, the same year the Shanghai Disney Resort opened. The film skyrocketed to the top of the charts and broke box office records in China. It remains the number 1 highest-grossing animated film in Chinese history.

The film starred Ginnifer Goodwin as Judy Hopps, a rabbit from a small town who dreams of becoming a cop in the bustling metropolis of Zootopia, and her run-ins with a sly fox named Nick Wilde — voiced by Jason Bateman — who ends up being a bigger part of her life than she ever anticipated.

Again, no opening date has been announced for Zootopia land, but with the construction moving at a rapid-fire pace, it may not be long until Disney tells us just when this exciting new area will open!

Are you excited to see Disney making an area dedicated to Zootopia? What do you think of the amazing Audio-Animatronics? Let us know in the comments!