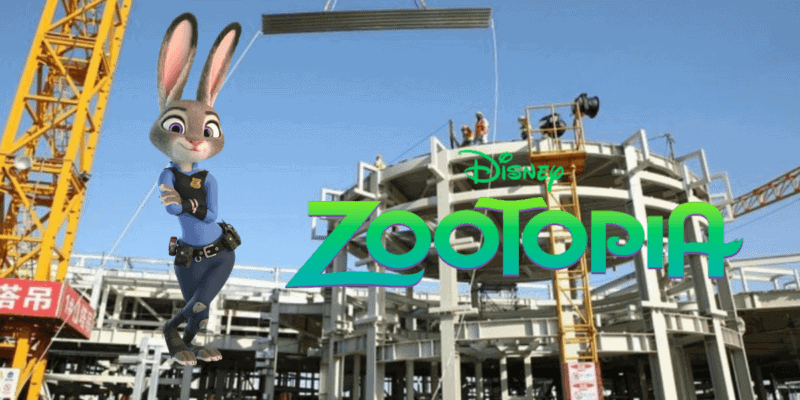 Disney is building a real-life Zootopia expansion at Shanghai Disneyland and it has reached a big milestone! Walt Disney Imagineering shared this milestone on their Instagram and we love seeing the construction progress continue to move forward.

Here is a look at the concept art so you have a reference for the construction photos!

Previously, we have talked about the ongoing construction of the Zootopia expansion progress at Shanghai Disneyland. This will be, much like the rest of the Shanghai Disneyland park, a completely unique experience — something that is not found in any of the other Disney Parks around the world.

Walt Disney Imagineering shared some insight into their progress on the Zootopia-themed land on their Instagram:

The final steel roof deck of the attraction at Shanghai Disneyland’s Zootopia-themed land was installed earlier today marking the attraction’s structure topping-out. To commemorate this important construction milestone, Disney Imagineers, representatives from @ShanghaiDisneyResort and local partners had the opportunity to sign the final steel roof deck and witness its installation.

You can go to their Instagram for more photos!

According to their post, the exterior structures of the land have now been completed! There is still work to be done, but as a Disney parks fan, it is satisfying to see such an immersive land come together step by step.

Disney gave us a small hint at what we can expect from the attractions in this new land.

…it [Zootopia] will include a new major attraction that will seamlessly blend Disney storytelling and state-of-the-art technology to bring this fan-favorite movie and its characters to life.

While on the surface that doesn’t seem like much it actually gives a good bit of information! We know that land will be home to a “major” attraction — which likely means an E-Ticket attraction, so think the same level as Expedition Everest or Space Mountain. We know it will feature state-of-the-art technology, perhaps similar to Disney’s most recent technologically advanced attraction, Star Wars: Rise of the Resistance? Lastly, as expected, it will be filled with characters!

Here is a look at what we believe is the show building that will house this attraction,

At this time, this is all speculation and we can’t know for sure what the Zootopia attractions will be like until Disney provides additional details.

We do not have an opening date for the land yet, and we expect that the construction hit some minor delays due to the pandemic. We will continue to report on its progress so stay tuned to Inside the Magic by subscribing to our newsletter below!

Are you excited for this Zootopia expansion to open at Shanghai Disneyland? Let us know in the comments!

Comments Off on ‘Zootopia’ Expansion at Shanghai Disneyland Reaches Milestone