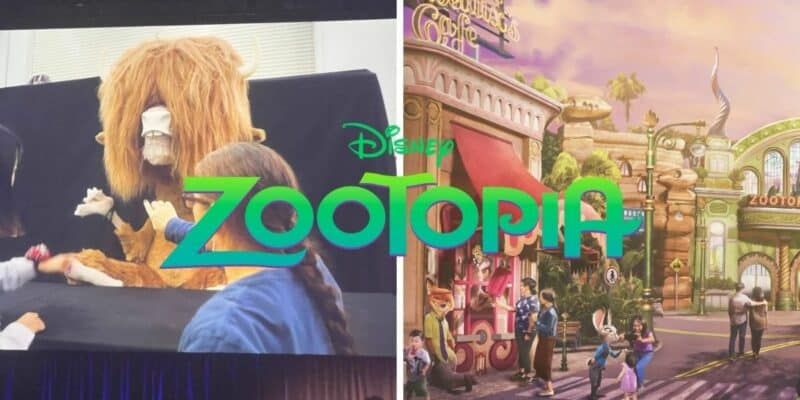 In 2019, The Walt Disney Company announced that they would be building their first-ever Zootopia-themed land at Shanghai Disneyland, and it’s safe to say fans of the movie were ecstatic.

Now, as Imagineers continuing working hard on bringing the land to life, fans got a first look at one of the animatronics that will be involved in the Zootopia-themed land at Destination D23 yesterday.

Disney Park and Experiences and Products Chairman Josh D’Amaro made a special appearance at the Destination D23 2021 event at Disney’s Contemporary Resort yesterday as he revealed a first look at one of the animatronics for Shanghai Disneyland’s Zootopia-themed land.

The animatronic is that of Yax the Yak, the owner of The Mystic Spring Oasis in Zootopia. One Twitter user shared photos from the panel to social media, writing:

Zootopia Land’s Yax animatronics are cute. Seems to be moving

When speaking to the new land, Disney Parks Blog shared:

At Shanghai Disney Resort, we’re celebrating the park’s 5th anniversary during its “Year of Magical Surprises” and work is progressing on a Zootopia-themed land – the first-ever land themed to “Zootopia.” Josh shared new footage of the new Audio-Animatronic figures, including Yax the yak!

Disney also released additional concept art, which you can see below. Though we do not have an opening date for the upcoming Zootopia-themed land, we do know that it will include one-of-a-kind entertainment, merchandise, food items, and more.

Inside the Magic will update you as we get information on the Zootopia-themed land at Shanghai Disneyland.

Zootopia (2016) tells the story of Judy Hopps (Ginnifer Goodwin) as she becomes the first bunny on Zootopia’s police force. In order to prove herself, she jumps on the opportunity to solve her first case, even though she must partner up with one of the most notorious scam artists in Zootopia, Nick Wilde (Jason Bateman). Disney Movies describes the animated film as:

From Walt Disney Animation Studios comes a comedy-adventure set in the modern mammal metropolis of Zootopia. Determined to prove herself, Officer Judy Hopps, the first bunny on Zootopia’s police force, jumps at the chance to crack her first case – even if it means partnering with scam-artist fox Nick Wilde to solve the mystery. Bring home this hilarious adventure full of action, heart and tons of bonus extras that take you deeper into the world of Zootopia. It’s big fun for all shapes and species!

Are you excited for Shanghai Disneyland to receive a Zootopia-themed land? Let us know in the comments below.

If you want to visit the Disney Parks on your next vacation, let the expert team at Academy Travel help you plan your next magical vacation. You won’t want to miss everything the Parks have to offer!