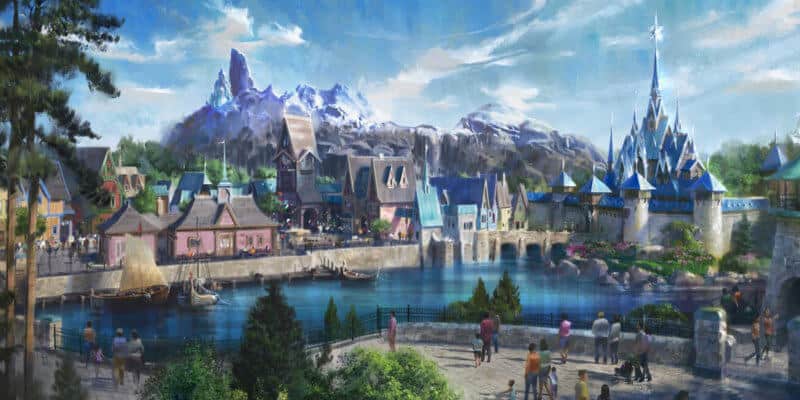 The initial construction stage of Disneyland Paris’ latest expansion may be completed this year as the Frozen-themed land begins taking shape at the Parisian Park.

While Hong Kong Disneyland is leading the way for the arrival of the Kingdom of Arendelle to Disney Parks Worldwide, Disneyland Paris is currently developing its own expansion inspired by the hit Disney film Frozen. From the look at the construction site, the progress on this exciting new project will most likely be quick and steady at the Parisian Disney Park.

Construction for the Frozen-inspired expansion began in July at Disneyland Paris, with the first cranes being spotted onsite by many Guests. Thanks to some recent photos shared by @Bieresnparks on Twitter, we can see that the lake — an essential part of the expansion — is beginning to take shape and that the foundations for the Frozen-themed land are already in place at the Parisian Disney Park.

Some aerial photos of #disneyland Paris from Mister Skouf and his catastrophic carbon footprint! If you do not have a reservation to access the park, you might as well fly over

Initially announced in 2019, the Frozen-themed land is part of a multi-year expansion program in development at Disneyland Paris. The project included Avengers Campus, which opened earlier this year, the new land inspired by Disney’s Frozen, and Disneyland Paris’ version of Star Wars: Galaxy’s Edge. However, the third area was reportedly scrapped by Park officials, and the future of the third part of this project is currently unknown.

Disneyland Paris is also developing a new area inspired by classic stories from England like Peter Pan and Mary Poppins, as well as a Tangled-themed attraction, all leading to the lake in front of the highly anticipated Frozen land at Walt Disney Studios Park. Park officials have not announced the official timeline for these projects, but Disneyland Paris seems to be going full steam ahead.

Disney Parks Blog says Guests can expect to experience the following once the Frozen-themed land opens:

Are you excited about this all-new Frozen-inspired land coming to Disneyland Paris? Let us know in the comments below!