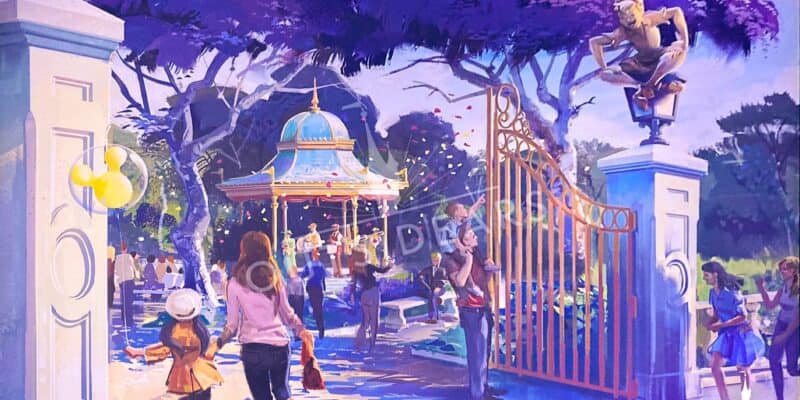 With Disney D23 Expo currently taking place in California, fans will learn a ton of new details on the upcoming projects for Disney Parks worldwide. We recently saw a scale model of the highly discussed Splash Mountain retheming — which will become Tiana’s Bayou Adventure at Disneyland Resort and Walt Disney World Resort — and the announcement of a massive Te Fiti statue that will look over a breathtaking attraction inspired by Disney’s Moana (2016) coming soon to EPCOT — The Journey of Water.

We also got a first look at the ride vehicles for several upcoming attractions, including Shanghai Disneyland’s Zootopia-inspired attraction and the different rides coming to Tokyo Disneyland’s Fantasy Springs, inspired by Tangled, Peter Pan, and Frozen. These sneak peeks at the new projects coming to Disney Parks worldwide are exciting and have us eager to learn more details throughout this weekend.

However, another exciting new project is coming soon to this Disney Park, and we are slowly finding more details about it.

Inside the Magic recently reported on a set of leaked blueprints for a massive upgrade coming to Disneyland Paris, involving the construction of an outdoor theater, a new themed area, and even an all-new attraction inspired by Disney’s Tangled (2010). While Disney is yet to release any official details on this upcoming project, including concept art and a timeline for the project, we recently learned an exciting new detail about this “art nouveau land.”

OutsidEars (@OutsidEarsDLP) shared an image of the first concept art for an all-new England-inspired project coming to the Parisian Disney Parks, which will reportedly be located in front of the new Rapunzel attraction.

First concept of English-inspired gardens built around a Gazebo which will be located just in front of the new Rapunzel attraction. This visual, here in HD, is displayed in one of the pavilions of the #D23Expo which begins today in Anaheim.

In the image, we can see a statue of Peter Pan welcoming Guests into this new England-inspired project and a beautiful garden with a gazebo inspired by Disney classic Mary Poppins (1964) that will most likely home different daytime entertainment offerings, including the live band performance seen in this concept art.

We can’t wait to hear and share more details on this exciting new project coming to Disneyland Paris — showing the constant commitment of Disney Parks worldwide to continue providing the most magical experience for every Guest visiting the Parks — during Disney D23 Expo, which is currently taking place at Anaheim California.

Are you excited about this upgrade coming to Disneyland Paris? Let us know in the comments below!