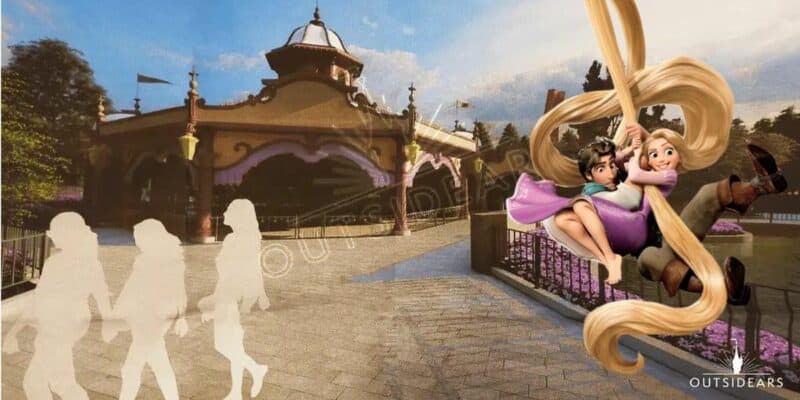 The only downside is right now, there are only a handful of smaller themed areas or icons that this fan-favorite animated movie has inside the Disney Parks. There are the Tangled-themed bathrooms at Magic Kingdom in Walt Disney World, a Tangled quick-service restaurant inside Shanghai Disneyland, and Rapunzel’s tower at Disneyland Park in Disneyland Resort.

On the bright side, Tangled is confirmed to be featured in Tokyo DisneySea as part of the Fantasy Springs expansion, which has several fans excited. Now, it seems Tangled may be coming to another Disney Park in the near future!

According to OutsideEars, a new attraction will soon be coming to Disneyland Paris and will be themed off of Disney’s Tangled. Per their report, the attraction will be similar to the Mad Tea Party, but instead of spinning in a teacup, Guests will board a wooden boat, similar to the one Flynn and Rapunzel sing “I See the Light” in from the film.

Forget the cups, you will take your place aboard wooden boats to spin around in the middle of hundreds of lanterns, all in a covered building but open on all of its different facades.

Although this report seems legit, we want to make it clear that Disney has not yet confirmed the new Tangled attraction. However, an announcement could be coming at D23, which will take place in a few weeks in California. Inside the Magic will be attending D23 and will report on any Disney Parks news announced.

Do you hope to see a new Tangled attraction at Disneyland Paris? Let us know in the comments below.