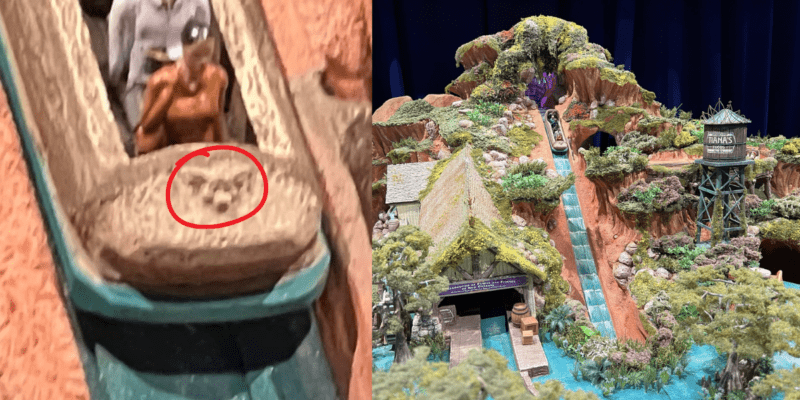 We previously reported the first look at Tiana’s Bayou Adventure at D23 in Anaheim, California. The long-anticipated Splash Mountain retheme will open at Walt Disney World Resort and Disneyland Resort in late 2024.

Eagle-eyed fans noticed Br’er Rabbit, the star of Splash Mountain and a character in Song of the South (1946), adorning a log that Guests are riding in. From @Sammyland6:

Brer Rabbit is still on the front of the log 👀

Brer Rabbit is still on the front of the log 👀 pic.twitter.com/5YDiKIlE85

Disney Imagineering is known for paying tribute to defunct attractions with easter eggs and hidden details. Given the controversial nature of Splash Mountain, some fans were surprised to see Br’er Rabbit at all.

However, it seems like the Br’er Rabbit carvings on the model log are leftover from Splash Mountain. According to Gustin:

Just a note: In the model, Brer is shown on the front of the log – but he won’t be on the logs when the ride opens.

Just a note: In the model, Brer is shown on the front of the log – but he won’t be on the logs when the ride opens. pic.twitter.com/PBrLZbgaHg

No closing date has been publicly announced for Splash Mountain in Frontierland at Magic Kingdom at Walt Disney World Resort or Critter Country at Disneyland Resort. The Song of the South (1946) ride will remain the same at Tokyo Disneyland, though the Disney Park recently removed the ride’s anthem, “Zip-A-Dee-Doo-Dah,” from its music loop. From Disneyland:

Are you excited for Tiana’s Bayou Adventure at the Disney Parks?