VIDEO: New 'Guardians' Coaster Pays Tribute to EPCOT's Forgotten Past - Inside the Magic 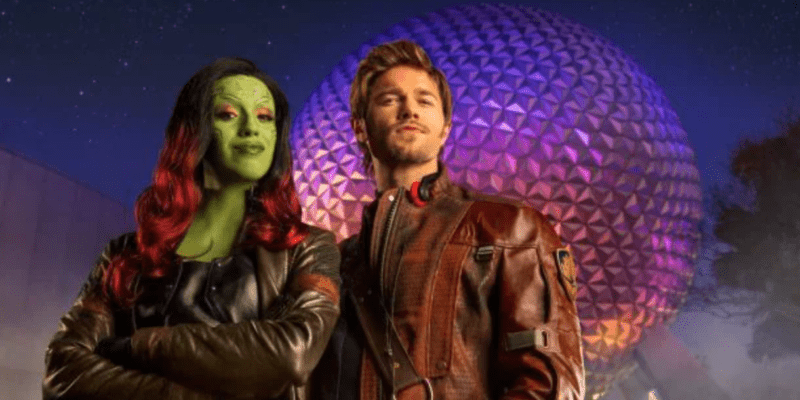 Today, theme park journalist for Nexstar Scott Gustin posted a new video from Guardians of the Galaxy: Cosmic Rewind, which he got to preview twice as part of a media event at the Walt Disney World Resort.

In the video, reportedly part of the ride’s pre-show, Peter Quill (Chris Pratt), popularly known as Star-Lord in the Guardians of the Galaxy franchise, stands with his fellow Guardian Gamora (Zoe Saldaña) and an unknown representative of Xandar.

Star-Lord reminisces about his childhood visit to EPCOT and says he hopes to revisit some of his favorite attractions.

Fans will know that Marvel’s Star-Lord was abducted from Missouri, USA, on Earth in the 1980s, explaining why he was able to visit EPCOT as a child. It also explains why his memories of the Park are… a little outdated! In the video, Chris Pratt’s Star-Lord says:

“I love that place! It’s awesome. I went there as a kid and I cannot wait to go back and ride Horizons! I also want to see The Energy dinosaurs and, of course, hear the Veggie-Veggie Fruit-Fruit! It’s the best. I can’t wait.”

At this point in the video, Gamora disappears, and the Xandar representative begins to speak:

“Okay, well, I’m sure it’ll be wonderful for you to relive all of those memories again. And it’s thanks to the Guardians that Xandar is reaching out to other cultures across the Galaxy.”

While she speaks, Star-Lord looks toward Guests for a moment before disappearing into space. See Gustin’s tweet for the video, where he plays into the joke, writing:

Hopefully, someone lets Star-Lord know that there have been a few changes at EPCOT in the last 40 years!

Guardians of the Galaxy: Cosmic Rewind will open at Walt Disney World’s EPCOT this month, during Memorial Day weekend. Among the new information we’ve gotten from reporters during the Walt Disney World Resort media event, we also know who can ride. From Disney:

Cosmic Rewind will have a 42-inch height requirement, and Disney  describes the ride as for “Tweens, Teens, Adults.”

Which of Star-Lord’s favorite attractions do you wish would return to EPCOT – Horizons, Universe of Energy, or Kitchen Kabaret? Who knows – maybe we’ll see him take a trip back in time to his favorite Disney Park in James Gunn’s Guardians of the Galaxy Vol. 3.

Comments Off on VIDEO: New ‘Guardians’ Coaster Pays Tribute to EPCOT’s Forgotten Past