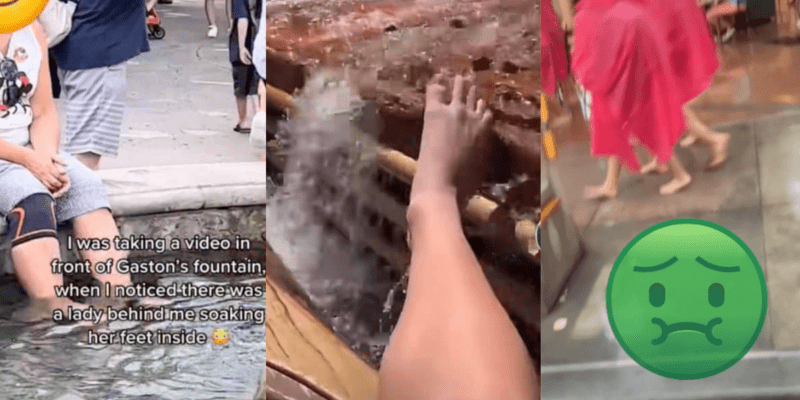 Over the past few months, viral TikToks have shown Guests breaking the Disney dress code in a different, much more unusual way: Guests are going barefoot at Walt Disney World and Disneyland Resort.

Some Guests have been spotted dipping their feet in Disney Park fountain water, while others have resorted to running through the Theme Parks without shoes after massive flooding.

However, multiple viral videos showcase the strangest trend of all: TikTokers uploading videos of themselves dipping their toes into Disney Park ride water.

“Cooling Off the Dogs” In Disney Ride Water

If you’re wondering why anyone would stick their foot into the water on “it’s a small world” or Splash Mountain, you’re not alone. Thousands of TikTok users are asking the same question.

Referring to toes as “the dogs” is a rising trend on TikTok, as is dipping your feet in Disney Park ride water. TikTok creators call it “coolin the dawgs off,” showcased in this video from @starburstyeeters on “it’s a small world” at Disneyland Park:

In another video from “it’s a small world” at Disneyland Park, @youcantfindmax forces his leg out of the boat and sticks his foot, sock and all, into the ride water:

Obviously, this trend breaks multiple Disney Park rules. It’s important to keep your hands and feet inside attraction vehicles at all times for your safety and Disney’s dress code requires Guests wear shoes at all times.
While you might not want to cool off your dogs, it might be tempting to avoid wet shoes by going barefoot on rides like Kali River Rapids at Disney’s Animal Kingdom or Grizzly River Run at Disney California Adventure. Unfortunately, this is against the Disney Parks Code of Conduct. Instead, we recommend switching to sandals and utilizing available lockers for your dry shoes, mobile devices, and other valuable items.

Barefoot In the Rain

Other viral TikToks have shown dozens of barefoot Guests running through Disney Parks barefoot in the rain, like this one from @bellamchristo at Disney’s Hollywood Studios:

♬ Who Let The Dogs Out – Original – The Doggies

According to the Environmental Protection Agency (EPA), rainfall in Florida has increased by 28% since 1958, and the trend of heavy rainstorms is expected to continue due to climate change.

If the EPA’s information is accurate, it looks like Magic Kingdom, EPCOT, Disney’s Animal Kingdom, Disney’s Hollywood Studios, and Disney Springs will to have to prepare for even more flooding in the future. And Guests will need to plan accordingly!

It might be uncomfortable to wear wet shoes at the Disney Parks, especially with the rain in swampy Florida. However, it’s against the Disney dress code to go barefoot at the Theme Parks. We recommend bringing spare flip flops, Crocs, or sandals to change into for water rides or rainy days!

Before packing for a Disney vacation, it’s important to review the Disney dress code. From Disney:

Of course, at the Disney Water Parks – Disney’s Blizzard Beach Water Park and Disney’s Typhoon Lagoon Water Park – the rules are a bit different! Lockers and towels are available for rent to keep your valuables – including nice shoes – dry! From Disney:

Be prepared by wearing a secure fitting bathing suit to prevent those unexpected mishaps. I would also consider some form of water sandals, water shoes or flip flops as the pavement can get hot. Refrain from wearing any clothing with metal, as the metal may damage the attractions. You may also bring a cover-up for when you’re strolling around and you may bring your own towel or rent one for a fee. Be sure to bring clothing that will be comfortable for you throughout the day and don’t forget your sunscreen and hat.

What shoes do you wear to Walt Disney World Resort and Disneyland Resort? Share your recommendations with us in the comments!