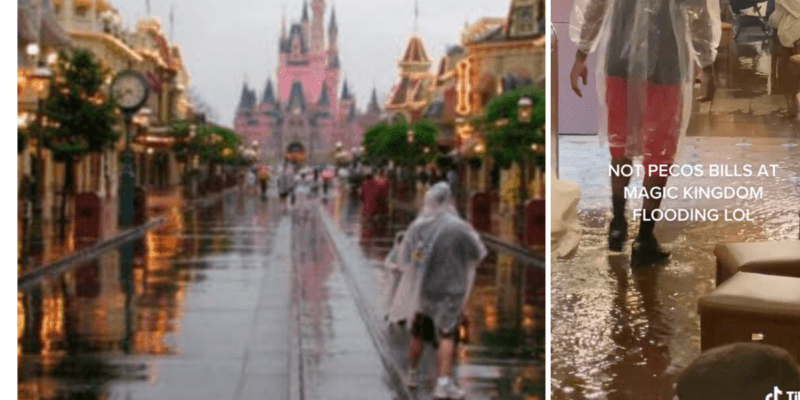 Disney Park Guests have the opportunity to experience plenty of magic when visiting Walt Disney World Resort, no matter whether it be Magic Kingdom, Dinsey’s Animal Kingdom, Disney’s Hollywood Studios, or EPCOT.

Haunted Mansion, Pirates of the Caribbean, Jungle Cruise, Space Mountain, Big Thunder Mountain Railroad, Splash Mountain, “it’s a small world”, and Peter Pan’s Flight are just some of the rides you can enjoy while visiting Magic Kingdom. In addition, the epic nighttime firework spectacular Disney Enchantment is being showcased nightly at Cinderella Castle.

However, one problem that has seemingly persisted for Disney, especially over the last several months, has been flooding issues.

Several videos have surfaced recently showing Disney Guests trouncing through several inches of water seemingly every single time that a rain storm has hit. The downpours have even caused some Guests to begin walking around the Parks barefoot, a viral trend that has many “disgusted.”

Now, another video has surfaced of the water not just forming on the streets, but making its way into a restaurant in a major way.

As you can see, the restaurant is Pecos Bill Tall Tale Inn & Cafe in Magic Kingdom. The restaurant had been overtaken by water due to the massive flooding. The user explained in a later comment that a drain near the restaurant was clogged, which caused water to back up into the building.

Rustle up some grub at this Old West saloon! Tell tall tales over chicken fajitas, southwestern salad and the bacon cheeseburger—all before riding off into the sunset to the taste of sweet treats like mini churros with dipping chocolate.

Have you experienced flooding at Walt Disney World Resort? Let us know in the comments!