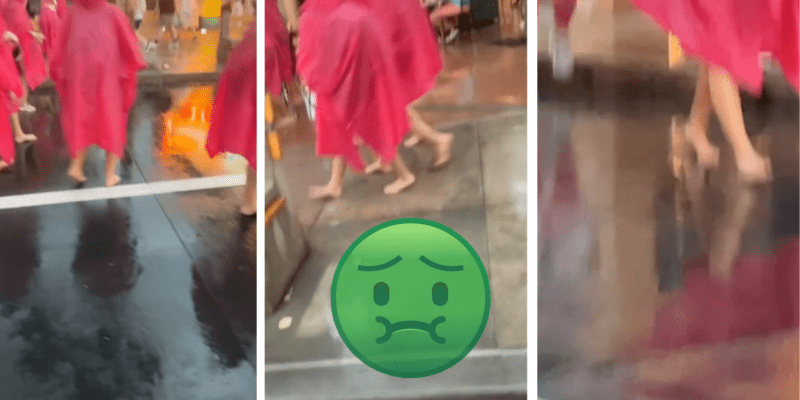 The Walt Disney World dress code has had multiple viral moments over the past year after a TikTok creator started a trend of purposefully wearing inappropriate clothing to get “dress-coded” and receive a free tee shirt.

The trend went so viral that Walt Disney World Cast Members were reportedly ordered to stop giving out free shirts.

Now, Guests are going viral for violating Disney’s dress code in a more disturbing way. @bellamchristo shared a video on TikTok of a large group of Guests at Disney’s Hollywood Studios walking barefoot in the rain:

♬ Who Let The Dogs Out – Original – The Doggies

“This needs to stop immediately,” the Disney Park Guest wrote, absolutely disgusted by what she saw.

Surprisingly, this isn’t the first incident of its kind. A recent TikTok trend even encourages Guests at Walt Disney World and Disneyland Resort to “cool the dogs off” by dipping their bare feet into the water on Magic Kingdom and Disneyland Park rides like Splash Mountain, “it’s a small world,” and Pirates of the Caribbean.

Some Guests have even been spotted dipping their toes into public fountain water!

Though wet socks and shoes might be uncomfortable, it’s against Walt Disney World Resort’s dress code to walk barefoot at the Disney Parks. From Disney:

We suggest you dress comfortably, wear good walking shoes and check the local weather report before you leave for the parks at Walt Disney World Resort.

Going barefoot at a Disney Park is not only against the rules but also unsafe. For your safety and the safety of others, please keep your shoes on at all times at Walt Disney World Resort.