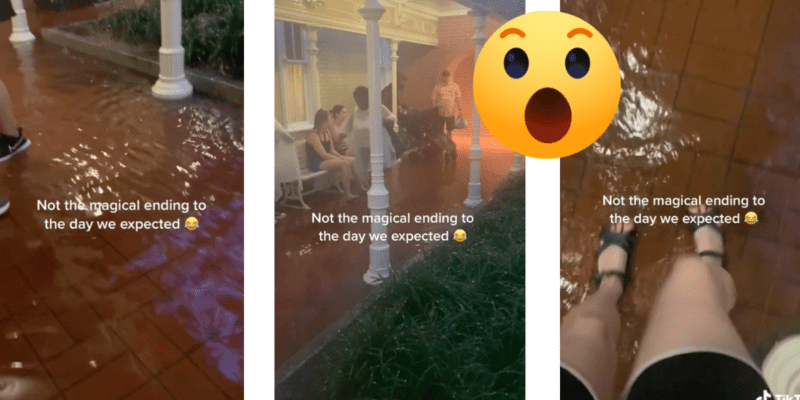 Walt Disney World Resort is built on thousands of acres of Central Florida swampland. Anyone who has visited knows that it practically rains once a day, especially during the summer and hurricane season!

However, over the past few months, more severe flooding has been documented at the Disney Parks – particularly at Magic Kingdom and EPCOT. Walt Disney World Resort has an infrastructure to handle rainwater, but it appears unable to handle an increase in rainfall.

Unfortunately for Lisa (@lisajbmusic on TikTok) and her party, flooding ruined their chance at seeing Disney Enchantment – a nighttime firework spectacular over Cinderella Castle at Magic Kingdom:

She shared this video of herself wading through ankle-deep flood water, while other stranded Guests take shelter under a building’s awning at the Disney Park. A commenter said, “Welcome to Florida in the summer time!” But Lisa noted that her party fully expected summer storms, but “of all of the many times I’ve been here, never experienced flooding and downpour like this for such a long period of time and at nighttime”

Lisa’s anecdotal evidence is supported by science. According to the Environmental Protection Agency (EPA), rainfall in Florida has increased by 28% since 1958, and the trend of heavy rainstorms is expected to continue due to climate change.

If the EPA’s information is accurate, it looks like Magic Kingdom, EPCOT, Disney’s Animal Kingdom, Disney’s Hollywood Studios, and Disney Springs will to have to prepare for even more flooding in the future.

Have you experienced flooding at Walt Disney World Resort?