"Flash Flood" Leaves Disney Parks Under Water - Inside the Magic 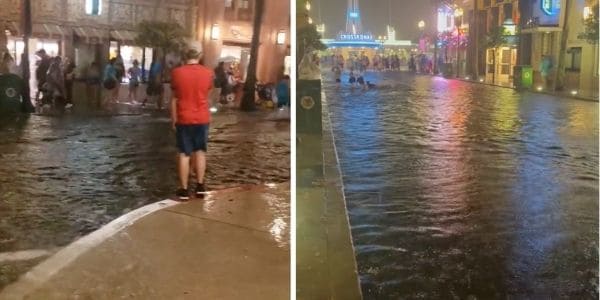 When visiting the Disney Parks, especially the ones in Florida, you can probably expect some hot, humid, and muggy weather.

This assumption would be right, as the temperatures in the Sunshine State can reach some incredible highs while also being pretty susceptible to rain. In the summer, it is common to see rain every day, and with it, a ton of flooding in the Parks due to the uneven grounds. Speaking of rain, last night at the Walt Disney World Resort, the Parks got completely flooded due to the heavy rain which happened yesterday.

There were tons of videos and images posted online about the flood that happened last night, which you can check out below. Nicholas Card (@JackJohnCard) posted a few videos of Disney’s Hollywood Studios:

Ok this is crazy! Hollywood Studios is totally waterlogged within 5 minutes!

Ok this is crazy! Hollywood Studios is totally waterlogged within 5 minutes! pic.twitter.com/vHeRvQOckq

As you can see, all of the walkways at Hollywood Studios were flooded with at least four inches of water. On TikTok, PagingMrMorrow (@pagingmrmorrow) shared a few clips of Hollywood Studios as well, calling it “the best day ever”:

The best day ever

In response to Scott Gustin (@ScottGustin), Kelly KACHOwski (@wdwkelly) posted another video which you can see just how deep the water was:

This was me approx. an hour ago… not shown is a person doing push-ups in the rainy street and someone body sliding into the puddle

This was me approx. an hour ago… not shown is a person doing push-ups in the rainy street and someone body sliding into the puddle pic.twitter.com/qJq7DfEbPZ

This isn’t the first time we have seen floods at the Disney Parks, as drainage seems to be a problem. Sometimes the water gets so bad that Guests can swim right in the middle of Magic Kingdom. While for some, this may add to the magic of being at Disney, others would prefer to stay dry while at the Parks.

Not to mention the fact that some rides like Test Track at EPCOT and Big Thunder Mountain at Magic Kingdom do not operate under heavy weather conditions, such as thunderstorms.

Have you ever seen it flood at the Disney Parks like this? Let us know in the comments below.