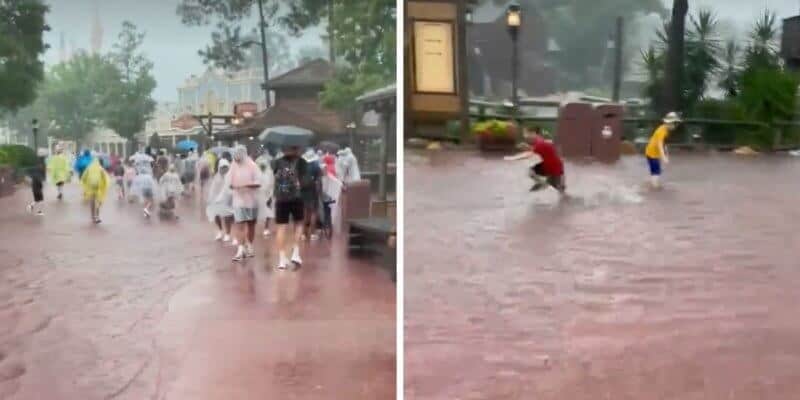 Credit: Screenshot via Anne B.

Summertime at Walt Disney World consists of lots of sun, but also several thunderstorms and random pop-up showers. If you have an upcoming vacation, be prepared to not only bring sunscreen and sunglasses, but ponchos and extra clothes as the rainstorms in Orlando during the summer months can come on suddenly.

On a recent trip to Magic Kingdom, the Florida rain caused parts of Magic Kingdom to become so flooded, that it was nearly a water park! Kids were seen legitimately splashing around throughout the walkways as if they were at Typhoon Lagoon.

One member of the Facebook group Annual Passholders – Walt Disney World Resort sent the following video to Inside the Magic that shows just how much rain came down in Magic Kingdom this afternoon, and it is clear that Guests were not expecting this.

In the video (below) you can see many children “splashing” around Frontierland having the time of their lives! The water built up and is as high as some of their ankles!

Another member of the Facebook Group, Cassie C., was also visiting Magic Kingdom during the storm and sent us the following photos and videos. Within the images, you can clearly see kids “swimming” in the walkways near the entrance to Tomorrowland!

Despite the torrential downpour, it is clear that families visiting Magic Kingdom did not let a little rain stop them from having fun — and even in a Florida storm, Disney memories were made that will last a lifetime.

It is important to keep in mind that having a stormy day at the parks could really change the trajectory of your day at times as select Disney World attractions may close due to the rain. With this being said, there are many attractions at the theme parks located indoors that Guests can enjoy while they wait out the storm.

Make sure to download the My Disney Experience app onto your phone as Disney will continue to update wait times and ride closures within this app.

Have you ever witnessed flooding at the Walt Disney World theme parks? Let us know in the comments below.