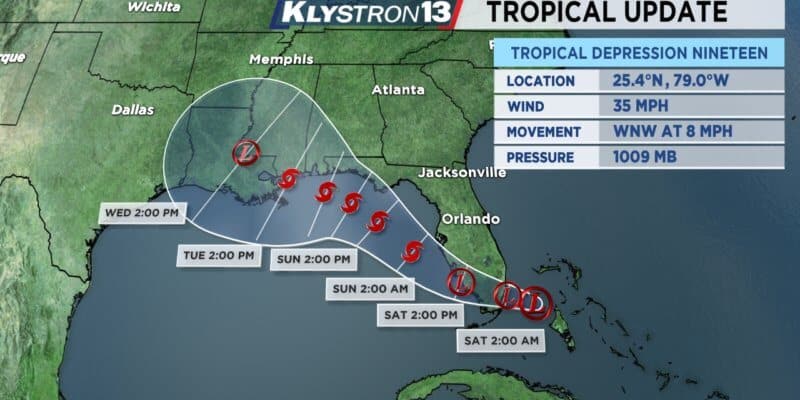 Tropical Depression 19 has officially formed and it is right on Florida’s doorstep! The brewing cyclone is expected to pass over the southern tip of the Florida Peninsula before turning north/northwest in the Gulf of Mexico.

The National Hurricane Center tweeted out the news at 5 pm EDT today, September 11, 2020.

Now, the good news is that it does not appear that Tropical Depression 19 is going to hit Walt Disney World or Universal Orlando Resort. However, the storm will send rain. And a lot of it!

Here is the 10-day forecast for Walt Disney World from weather.com:

For those of you looking to spend the upcoming weekend at the Disney theme parks, let’s look at those days a bit more in-depth.

On Saturday, September 12, The Weather Channel is predicting “Scattered thunderstorms in the morning becoming more widespread in the afternoon. Heavy and torrential downpours at times. High near 85F. Winds E at 10 to 20 mph. Chance of rain 80%” during the day and “Scattered thunderstorms in the evening. Cloudy skies overnight. Low 76F. Winds ESE at 10 to 15 mph. Chance of rain 60%” at night.

We at Inside the Magic recommend that you prepare for rain in the parks. Perhaps use this time to invest in a Walt Disney World poncho.

We believe that the most magical Disney day can still happen on the rainest of days. However, Guests should also expect outdoor rides like Splash Mountian and Astro Orbiter to close due to lightning within the area and have contingency plans ready if such temporary shutdowns occur.

The Walt Disney World Resort is prepared to face any weather that comes its way which makes it one of the best places to be if you have to ride out a major storm.

We will keep our readers updated if the storm decides it wants to take a Disney Vacation itself.