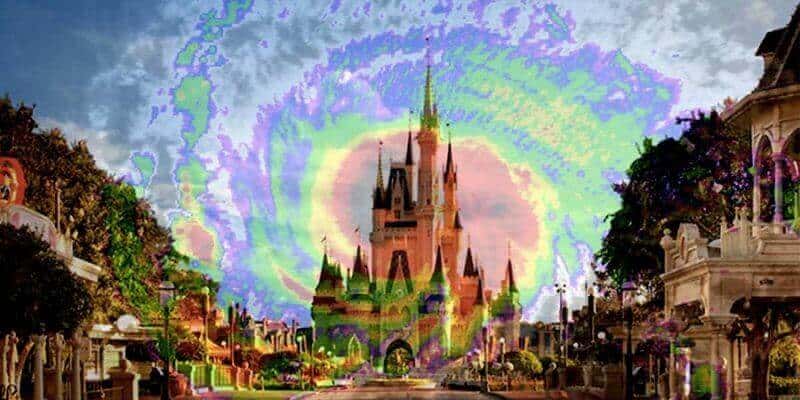 It’s time to take a moment and talk about what happens when a hurricane decides to take a Disney Vacation.

In August of 2019, Hurricane Dorian was bearing down on Florida. Most spaghetti models had the behemoth passing straight through Central Florida, and Governor Ron DeSantis issued a State of Emergency.

As we now know, Dorian decided to never make landfall in Florida and skirted up the east coast to North Carolina instead. But, its expected arrival no doubt ruined many a Disney vacation. Many would-be vacationers chose to cancel, reschedule, or cut their trips short to avoid being stuck in Florida during such a powerful storm.

Once again, Florida finds itself in the midst of another hurricane season. According to NOAA, that season begins on June 1 and lasts until November 30. That means all of the Disney fun of Summer, Labor Day Weekend, and Halloween occurs during hurricane season.

If a hurricane decides to take a vacation for Florida the same time you do, weather forecasts usually give everybody enough warning to be able to get out of the storm’s way. And you should definitely do that if you can. However, if you find yourself stuck in Florida with a hurricane bearing down on you, you want to take refuge in a Walt Disney World Resort hotel.

**Again, we do not in any way mean to convince you to still visit during a hurricane! This is a message for those who cannot leave Florida and need a safe place to stay.**

Walt Disney World boasts some of the best infrastructure found in Hurricane Territory. Every window and doorway of every building is built to withstand hurricane-force winds. Every guest gets a room, just like always, and everyone is asked to stay sheltered at their resort until the storm passes. Matching the level of safety is the level of security. Walt Disney World is already known for its famous levels of security in its parks, and that doesn’t stop on account of rain. The doors stay locked. The parking lots stay gated. You will be safe. Your things will be safe.

If your cruise gets canceled, your last-minute flight home gets canceled, and you find yourself stranded in the path of a hurricane on the day you are due to check out of your hotel, Walt Disney World employees will do everything in their power to find you and your family a room–your OWN room–to extend your stay. The incoming storm will also have inspired several trip cancellations, leaving rooms open in the 30+ hotels on property.

Those who found themselves stranded at Walt Disney World during Hurricane Irma in 2017 reported the following:

Magical Memories Can Still Be Made

Despite the pouring rain and the howling wind outside your window, you’re still in a Walt Disney World Resort hotel. The magic doesn’t stop. Guests trapped in their hotels are treated to marathons of Disney Classic Movies and Mickey Mouse Cartoons, and there have even been reports of extra special character meet and greets taking place in the hotel lobbies. Imagine the memories made watching your children ride out a storm by watching movies with their favorite Disney characters.

Yes, hurricanes are scary, especially for those who are visiting Florida for the first time. But, if you do find yourself facing one on your Disney vacation, remember that you are in one of the safest, nicest, and definitely the most magical place in all of Florida.