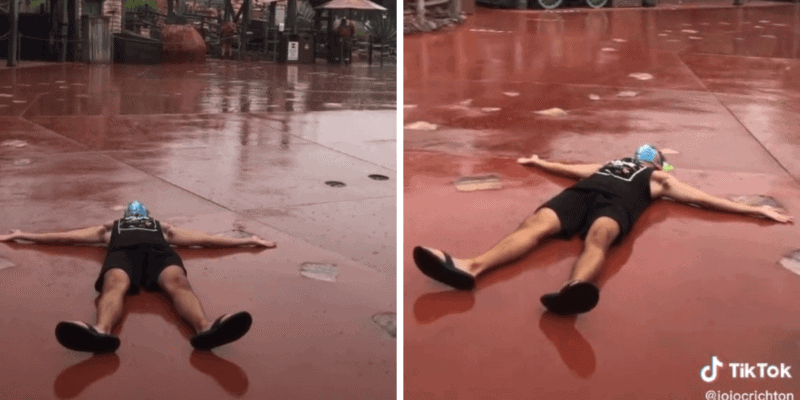 Whenever it rains at the Disney Parks, how do you react? Do you fully embrace the rainy weather, head for shelter right away, or leave the theme parks ASAP?

One man celebrated the rain at the theme parks in a very different way, but we totally love it!

In the TikTok video below, you can see one Disney World Guest lying on the ground in the middle of Frontierland in Magic Kingdom. He looks to be fully embracing the rain — and we can hear others nearby getting a kick out of it!

“These Disney Cast Members we’re DYING when I did this ?” the caption to the video reads. Take a look:

These Disney Cast Members we’re DYING when I did this ? #disneyworld #disneycastmember #fy

He also did something similar at Universal Orlando this week:

It was a hot day at universal studios ? I had to cool off ? #univeral #universalstudios #fy #foryou

The man in the videos above is Jonathan “Jojo” Crichton, or Jojo’s World on YouTube. Across his social media channels on TikTok, Instagram, and YouTube, Crichton shares his adventures throughout Walt Disney World Resort and brings some positivity and laughter to the internet. Especially during times like these, it’s refreshing to see someone share uplifting content online.

Everyone is checking out the Castle from the Front but HAVE YOU SEEN THE CASTLE FROM THE BACK! IT’S BEAUTIFUL ? – Overall I really enjoy the new paint job for Cinderella Castle. I can’t wait for all of you to have your own opportunity to see if for yourself. Until then make sure to check out my YouTube Channel for all coverage of the park reopening. – THANK YOU so much for your constant support and positivity. It means the world to me. I’m so happy to be back in Disney World making videos for y’all. ❤️

This isn’t the only case of something silly or unheard of happening at Disney World. We’ve shared some pretty interesting stories involving Guests and Cast Members lately, from Guests experiencing magical moments to some less magical mishaps occurring on attractions and even to strange occurrences at the parks.

In less positive news, a few weeks ago we shared the incident of a woman picking up a duck at Magic Kingdom, allegedly to get views on TikTok. You can read the scoop on that story here.

Even though we’re moving toward the stormy season in Florida, that doesn’t mean Disney World won’t welcome you home! If you want to book your next Disney trip to the Most Magical Place on Earth, click here to reach out to the Authorized Disney Vacation Planners at Academy Travel.

Would you ever embrace the rainy season at Disney World and lie on the ground in the middle of the walkway? Or do you tend to duck and cover when the weather gets rough? Let us know in the comments!