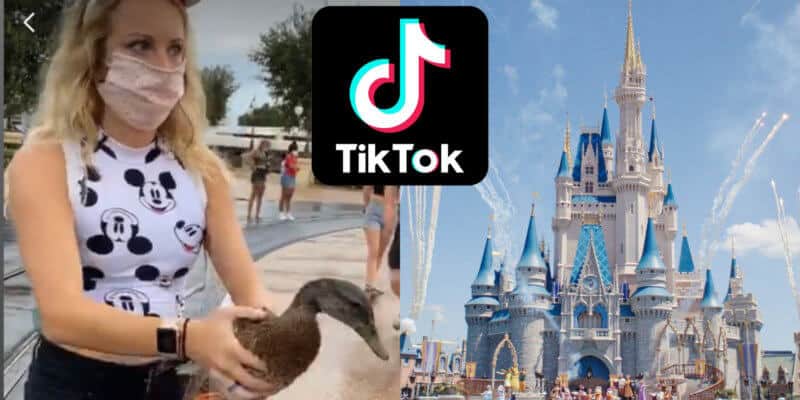 In a now-deleted video on TikTok, a young woman, who is believed to be a Walt Disney World Cast Member, based on her social media, was seen picking up a duck in front of Cinderella Castle, reportedly to get views on her TikTok account.

The video, which has since been removed from the social media site, featured user @samanthaswerva holding a duck against its will in Magic Kingdom’s hub during the park’s Cast Member preview earlier this week. Note that the woman who held the duck was not doing so while she was on the job, but instead while she was visiting the park as a Guest during the preview event.

Have you actually lost your mind??? Why are you touching a duck? Common sense isn’t common I suppose. pic.twitter.com/7dvi2mF4c5

“I’m here for the ducks,” read the caption of the video. Samantha is believed to be a lifeguard for Walt Disney World.

After going live, the video sparked a mass of comments from users on TikTok, most of whom came to the defense of the duck.

These two comments were only a few of many, which have all appeared on Samantha’s other posts on her TikTok account since she deleted the original video.

On a TikTok post Samantha posted from her ride on it’s a small world at Magic Kingdom, @ineedsleep6969 commented, “Aren’t you the one who literally picked up an innocent duck at Disney? You know the ducks are wild animals and are not there for you to mess with. Grow up.”

The ducks at Walt Disney World, although they have always been a scenic addition to the parks’ atmosphere, are wild animals. They are typically left alone by Guests. Guests are often reminded by Cast Members not to feed or touch any of the animals in the parks, and most Guests abide by these guidelines.