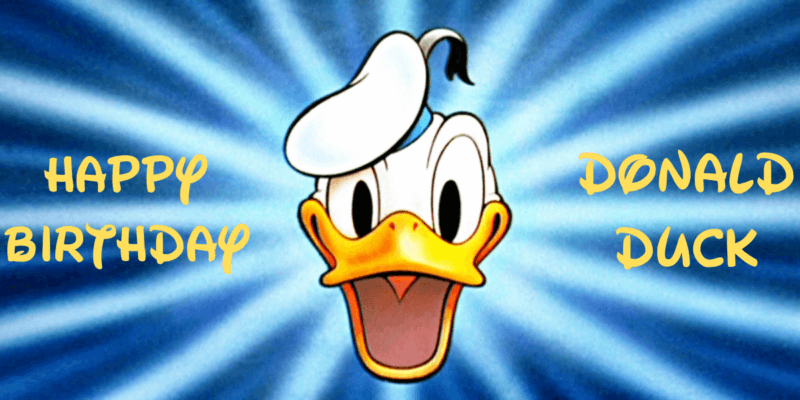 On this day in 1934, the world was introduced to its favorite duck: Donald Duck. While some fans may remember getting hints that Donald’s birthday in the shorts is Friday the 13th, June 9, 1934, is when he was brought into the world as a character.

Over the next 86 years, Donald Fauntleroy Duck would live quite an adventure. He joined “The Greatest Generation” serving in World War 2. He became an emissary for the United States to the peoples of Latin America making everlasting bonds with Jose Carioca from Brazil and Panchito from Mexico.

Donald has also proven himself to be a family duck to the core, taking in his nephews Huey, Dewie, and Louie, for his sister Dumbella (Della). Not to mention his feelings for Daisy and the extent he has proven to go to keep her around. If Disney proves one thing with Donald Duck, it’s that one can suffer from terrible erratic tempers and still be a good person.

Disney has had a special day planned for the world’s most beloved foul-tempered fowl at Shanghai Disney Resort–Shanghai Disneyland is the only Disney theme park open right now–and Donald could not be more excited to make the most of his big day. But for those Donald fans who can’t make the trip and be there with him to celebrate, Disney’s streaming service, Disney+, has created a very special collection in his honor that includes Donald’s movies, tv shows, and cartoon shorts.

Out of all of the “Fab Five,” Donald has been one of the most featured in feature-length films. From Christmas specials like the Mickey’s Christmas Carol and Mickey’s Once Upon A Christmas to his own movie in The Three Caballeros, Donald has worn many hats and had many adventures that range from dancing the samba in Brazil and exploring the Andes to becoming a Musketeer and helping Noah get the ark ready before the flood.

Donald Duck has also gotten more than his fair share of time on the small screen. While he has joined his friends in shows such as Mickey Mouse Clubhouse, Mickey Mouse Roadster Racers and Disney’s rebooted Mickey Mouse cartoon short series, Donald has had a TV career of his own taking his fans with him on adventures in shows such as DuckTales (2017) and The Legend of the Three Caballeros.

Before the movies and the TV shows, Donald Duck won fans over in his cartoon shorts. His shorts introduced the world to a few characters like Daisy Duck (“Mr. Duck Steps Out”) and Chip ‘n Dale (“Chip an’ Dale). His overexaggerated struggles made people laugh and generated empathy with those for whom nothing in life–even the simplest tasks like setting up a beach chair or fixing a tire–seemed to come easy.

Here is the full list of shorts available in the collection:

But Donald Duck’s adventures are far from over. Season 3 of DuckTales is currently being released on Disney Channel and is available on Disney Channel NOW, and fans look forward to yet another season of Mickey Mouse Cartoon shorts to arrive.