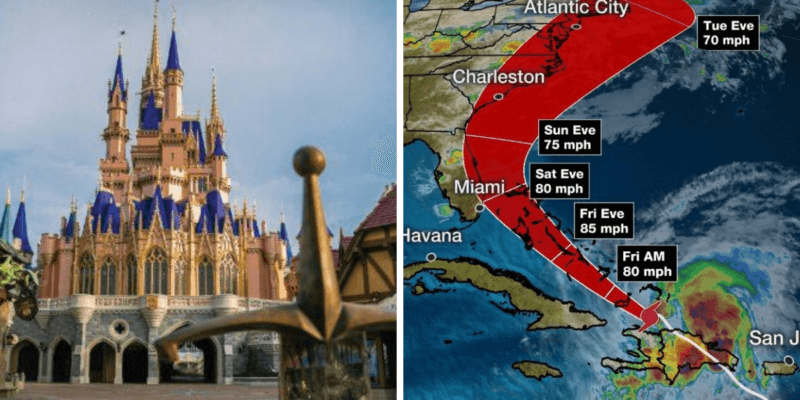 As of August 1, 2020, Orange and Oceola counties have also both declared Tropical Strom warnings. Walt Disney World itself has still remained mum on the issue. The mega-resort has not yet released an official comment on the matter.

The storm continues to be tracking east, appearing to remain off Florida’s East Coast. According to weather.com, thunderstorms still expected at Walt Disney World beginning Sunday, August 2, and carrying on through the end of the week.

A lot of factors in the forecast will determine the ultimate path #Isaias will take. We have live coverage and expert analysis on @weatherchannel for the duration of the storm. See you there! pic.twitter.com/XtIR8aoHvZ

Around 11 p.m. EDT on July 29, 2020, Tropical Storm Isaias officially formed in the Caribbean, and it still appears to be heading for Florida.

According to the Weather Channel’s projections on July 30, the Greater Orlando Area–which includes the Walt Disney World Resort and Universal Orlando Resort–is still in what they call the “cone of uncertainty.”

Tropical Storm #Isaias is bringing heavy rain to Puerto Rico this morning. It's forecast to track near Florida and possibly other parts of the Southeast coast this weekend. Details are still uncertain: https://t.co/fiui3BgOEF pic.twitter.com/hTB80i56BC

However, while Isaias still poses some threat, it also appears to be turning right and heading east, choosing a beach vacation on Florida’s Atlantic Coast over a trip to Disney World. For our readers looking to be on Walt Disney World property this weekend, we will continue to watch this storm as it moves closer and closer to the Sunshine State, and keep you updated on the weather.

However, it is now expected to further evolve from a Tropical Storm into a Hurricane, causing The Bahamas to issue a Hurricane Warning. Tropical Storm Watches have officially been issued in counties all along southern Florida’s Atlantic Coast.

Breaking: #Hurricane warnings issued for the Northwestern Bahamas due to Tropical Storm #Isaias.

We are live until 12am ET tonight to give you the latest forecast! pic.twitter.com/xuvDvU4JiV

Hurricane Isaias Forms, Disney Out of “Cone of Uncertainty”

During the night of July 30, Tropical Storm Isaias officially evolved into a Category 1 hurricane recording sustained winds at 80 miles per hour.

However, there seems to be some good news. The Weather Channel is tracking Isaias moving even further east. Now, Walt Disney World appears to be completely out of the cone of uncertainty.

Hurricane #Isaias will track through the Bahamas into Saturday and near Florida this weekend, before tracking up the East Coast next week: https://t.co/FPde9xZAac pic.twitter.com/Qo7ltTdJmX

However, the Orlando Sentinel is reporting that Isaias could strengthen further into a Category 2 before it reaches Miami. The storm has also slowed from 23 mph to 17 mph.

While Isaias continues to appear moving east, Florida Governor Ron DeSantis has declared a State of Emergency for counties potentially in the Hurricane’s path. That includes Orange and Oceola Counties, the two in which Walt Disney World Resort is located.

I've signed Executive Order 20-181, declaring a state of emergency for counties in the path of Hurricane #Isaias. For those living on the East Coast, prepare now. Have 7 days of food, water, medicine & other supplies in case you lose power. Follow @FLSERT for updates.

As of 10:30 a.m. ET on July 30, Guest looking to visit the Walt Disney World resort on Saturday, August 1, should expect sunshine! While meteorologists are tracking the tropics, they still predict partly cloudy skies, a 20% chance of rain, and a high of 92 degrees Fahrenheit.

But things are looking stormy after that. Weather.com is predicting thunderstorms through Sunday, August 2, and into Monday, August 3. Winds are expected to range from 10-20 miles per hour.

To speak more on a positive perspective, weather.com is predicting that Tropical Storm Isaias will not be coming that close to Disney World at this time. These 10-20 mile per hour winds–which are quite common in a normal Florida thunderstorm–pale in comparison to the 70 mph sustained winds Isaias is expected to have come Sunday.

However, the weather has changed. As of 8 pm ET on July 30, weather.com has begun predicting rain and lots of it. From Saturday, August 1, to Monday, August 3, visitors to Walt Disney World should expect a deluge of rain as outer rainbands of what is predicted to be Hurricane Isaias begins to graze central Florida.

With the news of hurricane development, comes a new weather forecast for Walt Disney World this weekend. As of the morning of July 31, Disney World Guests will have a Saturday that has a 40% chance of rain (UV Index is expected to be extreme, so please take proper precautions).

Sunday is still expected to be stormy with scattered thunderstorms throughout the day and into Monday.

Hopefully, Isaias will continue its track to the east and head further out to sea. But if Isaias decides to make a turn, and you and your party find yourself stuck on Walt Disney World property, we want to remind those readers that if you are stuck anywhere in Florida when a tropical system hits, there are few better places to be than Walt Disney World.

But whenever hurricane season looks to interfere with your Walt Disney World vacation, it helps to have experts advice regarding your options. That is why we recommend our friends at Academy Travel. They ensure you are aware of all of your options to help you pull off the most magical Disney World Vacation possible. Click here to learn more and receive your free, no-obligation quote today.