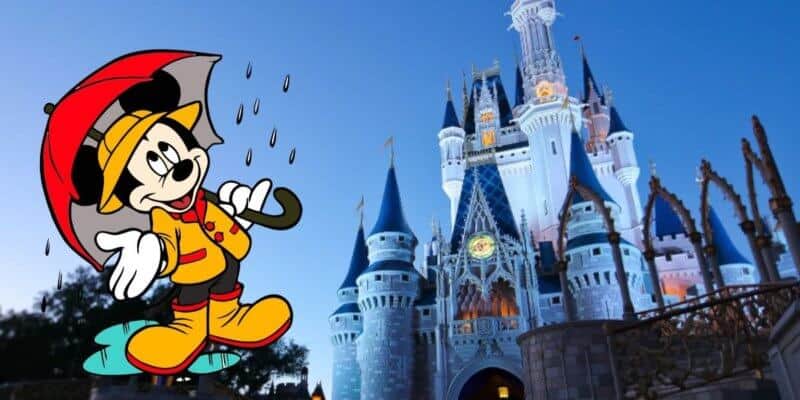 A rainy day in Walt Disney World is still better than a sunny day at work — am I right?

Sometimes it can be a bit difficult to plan around the rain, but don’t let some raindrops put a damper on your day in the Most Magical Place on Earth! Here are some ideas of what you and your family can do to bypass the rain until the sun comes back out shining.

If you are spending the day in Disney’s Magic Kingdom theme park and it starts to rain, make sure you stop and see the afternoon parade. Normally, Disney Festival of Fantasy Parade strolls down Main Street U.S.A., but some of the Disney characters can’t perform as planned. That doesn’t mean the magic has to stop though! The “Rainy Day Cavalcade” brings Mickey, Minnie, and some of their Disney friends in antique vehicles along with parade performers who are dressed in their adorable rain gear.

There are also a ton of Disney attractions that are indoors for your to enjoy even in bad weather. Zoom through outerspace on Space Mountain, go on a voyage on Pirates of the Caribbean, or tour through the Haunted Mansion on your very own Doom Buggy.

If you are stuck in bad weather over at Epcot in Disney World, you can head over to Soarin’ Around the World and take a hang-gliding flight on this indoor attraction.

You can also go under the sea (without getting wet) on The Seas with Nemo & Friends as you go on an adventure to look for Nemo. Afterwards, Disney guests can walk through a 5.7-million-gallon saltwater aquarium and even have a conversation with everyone’s favorite sea turtle in Turtle Talk with Crush.

This is one of my favorite parks to be stuck in during rainy weather at Disney World since there is so much to see and do! Start off by checking into the Hollywood Towel Hotel on The Twilight Zone Tower of Terror.

After you visit the Twilight Zone, you can head over to Rock ‘n’ Roller Coaster Starring Aerosmith, which is right next door! Get into the super-stretch limo and speed over to the concert, all while listening to classic hits by Aerosmith.

One of the most popular attractions at Disney’s Animal Kingdom is The Festival of the Lion King show, which is also a great spot to dodge those raindrops and enjoy yourselves (while staying dry). Celebrate the music from the film The Lion King with acrobats and some of your favorite Disney characters.

You can also take an indoor boat ride in Pandora – The World of Avatar. On this mystical journey into Pandora’s glowing rainforest, Disney guests will be surrounded by gorgeous sights and sounds (and avoiding the rain, of course).

Disney guests can also head to any of the Disney Resorts to explore. Rainy weather at Disney World makes for a great day to resort hop and see what each resort has to offer.

And, if you are looking for something other than an attraction to bypass the time, Disney guests over 21 can grab a glass of wine or ice cold beer at several locations throughout most of the theme parks. Grab a drink and maybe even a snack, find a seat inside, and relax!

There is so much to see and do at Walt Disney World, and thankfully a majority of things you can still enjoy, even on a rainy day.

What’s your favorite Disney activity to do during a rainy day at Walt Disney World?