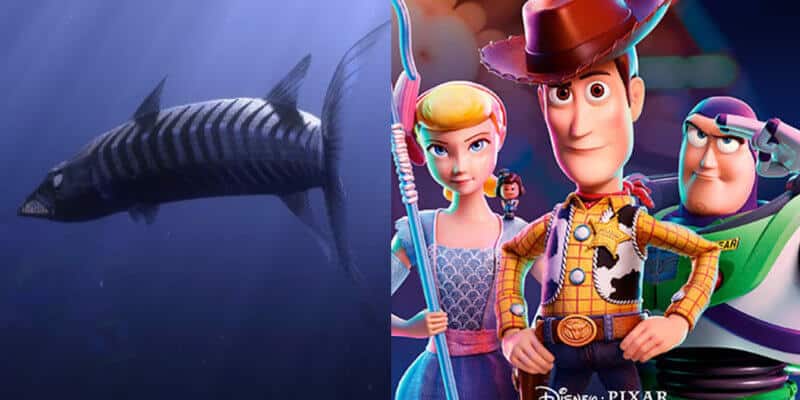 Most Disney/Pixar fans are quite familiar with the tragic opening to “Finding Nemo,” which ends with Nemo not only losing his mother, but also his many siblings from an attack by a sharp-toothed barracuda. As terrible as this tragic and unfair scene remains to be, it seems this heartless killer has been brought to justice after all by the blockbuster film company.

For those wondering how this monster was brought to justice, you’re probably thinking: “How could Disney/Pixar possibly have brought this heart-shattering villain to justice? I didn’t see anything ever happen to that vicious monster onscreen?” Well–you’re right, Disney/Pixar Animation Studio never showed the barracuda ever again after that horrific scene in “Finding Nemo.” However, it seems the company was able to get the point across that the barracuda was brought to justice through another means: an epic Easter egg in “Toy Story 4.”

The Easter egg was recently confirmed to BuzzFeed news by “Toy Story 4” director and producer Josh Cooley and Mark Nielsen. The two revealed that the barracuda was stuffed and mounted on the wall of the antique store in “Toy Story 4.”

If you look at the image below, you see the full scene of the shop from the movie. However, when you zoom in (in the second image) you see the nasty fish given the punishment he deserves.

For those looking for even more Easter eggs hidden in “Toy Story 4” in the antique shop, others include Carl Fredrickson’s cane from “Up” on a shelf and the diver’s mask from “Finding Nemo,” which famously reads “P. Sherman, 42 Wallaby Way, Sydney.” This scene also features Casey Jr. Circus cookies from “A Bug’s Life.”

Other Easter eggs featured in the film include Reptilius Maximus from the TV special “Toy Story that Time Forgot,” which can be found on Bonnie’s lunchbox. A few others include Arlo from “The Good Dinosaur” found under a table in the back of the antique store, an old Dinoco gas station neon sign hanging on the wall of the antique shop, and the license plate on the family RV is “B3N604,” which is the number of the Toy Story 4 art room at Pixar.

To look for even more hidden gems from other Disney/Pixar films in “Toy Story 4,” be sure to download the film now as it is currently available in Digital in 4K Ultra HD, HD, 4K Ultra HD, Blu-ray, and DVD.

What are your thoughts on this Easter egg in “Toy Story 4” showing the justice brought to the evil barracuda in “Finding Nemo”? Let us know in the comments!