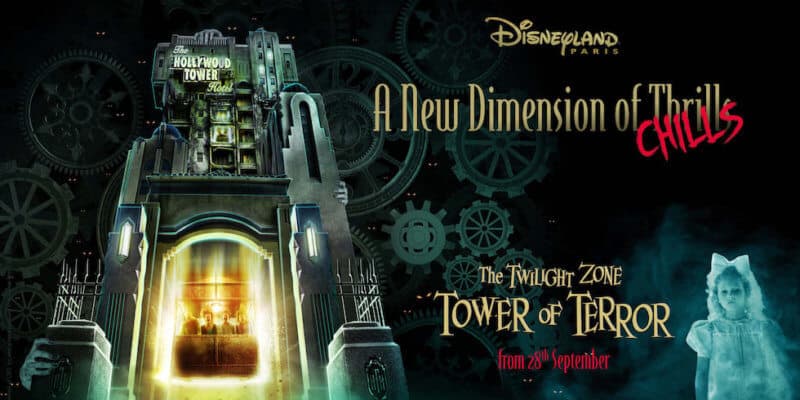 Everyone knows the thrills and chills behind the Tower of Terror attraction at Disney Parks. But for Guests at Disneyland Paris, the thrills are getting bigger, and the chills are getting more spine-tingling. The newest version of the attraction, called The Twilight Zone Tower of Terror–A New Dimension of Chills, has been cursed once again, and this time is more mysterious and more frightful than ever before.

Disney’s Imagineers have gotten into the Halloween mood early this year, as they began re-cursing the attraction on August 21, promising Guests a more hair-raising experience than ever before. Though the haunted elevators will remain in service and in working order while the ride becomes more terrifying, the newest eerie frights and details will fully materialize beginning September 28, just in time for the equally terrifying Halloween season!

There will be three new frightful experiences for Guests to partake in, if they dare: the Malevolent Machine, the Shaft Creatures, and the 5th Dimension.

This terrifying new addition to the attraction is truly horrifying. This new part of the ride involves a machine intent on trapping Guests in the elevator. The elevator makes terrifying screams, as if delighted that you are in terror. The elevator shoots you up and forces the elevator car back down–all without warning or reason! Can you get out?

Just the sound of this is scary. The creatures know you’re on the elevator. So whatever you do, don’t scream! These creatures are running loose on the elevator, looking for terrified Guests to haunt and terrorize. The louder you scream, the more terrifying they become!

The “Twilight Zone” is known for its out-of-this-dimension stories of terror and fear. And now there’s a portal on the elevator that has opened up into the 5th dimension. The ghost girl who haunts these elevators may just be the least of your worries!

Starting 28 September 2019, guests will discover three new hair-raising experiences in The Twilight Zone Tower of Terror– A New Dimension of Chills: The Malevolent Machine, The Shaft Creatures and The 5th Dimension! #DLPMediaExpo pic.twitter.com/0QLk2vxrEy

The history of the haunted elevator

You don’t know the story of the Twilight Zone Tower of Terror? This Halloween marks the 80th anniversary of that fateful night in October 1939. The Hollywood Tower Hotel was once the place for Hollywood’s elite to get away from it all during the Golden Age of Hollywood. That is, until Halloween night, 1939. It was on that night that a freak storm materialized out of nowhere, and lightning struck the hotel, causing chaos and catastrophe. Five people who were in an elevator car in the hotel–one a little girl–were never seen or heard from again.

It is the little girl who they say now haunts the elevators.

The lobby of the hotel is exactly the way it was that night. No one wants to stay in the hotel anymore after the horror of what happened that scary dark Halloween night. But the elevators are in service, should you be brave enough to step into one. Strange accounts of the elevators dropping and rising and dropping again have been told for years. And you can always hear the screaming…

Now that the hotel is even more spooky, no one knows what might take place this Halloween season. Could the 80th anniversary of this tragedy be a repeat of that terrible night? Only the bravest will ever know for sure.

Are you brave enough to step into a supposedly “haunted” elevator car at the Tower of Terror attraction? What new spooks and frights do you think are being added? We’d love to hear from you in the comments!