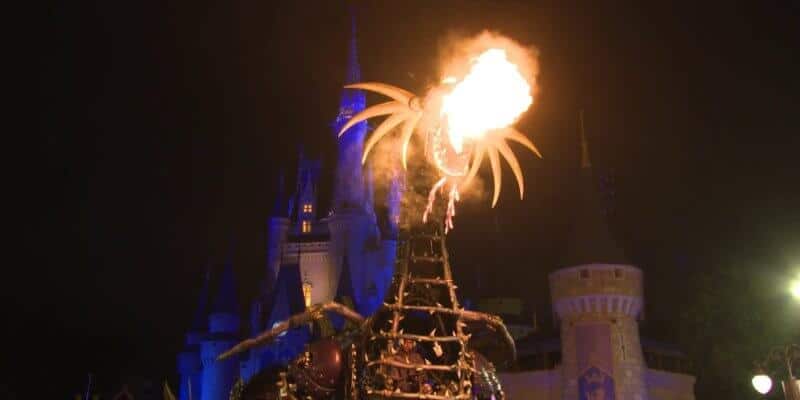 One of Disney’s greatest villains, Maleficent, makes a triumphant return to the Festival of Fantasy parade today at Magic Kingdom Park.

Maleficent, in her full dragon form, has been missing from the parade since May 2018, when she caught on fire during the show. Disney Parks Blog announced her return to the parade with a funny “Villains Weekly” magazine cover headline: “She’s Back! Maleficent speaks out about having some work done.”

The dastardly dragon still sports her classic Steampunk style, with safety features to keep her under control during the show. Disney also teased her return with the dramatic reveal video below.

Other favorites from “Sleeping Beauty” return to the parade as well. Look for Prince Phillip, the fairies Flora, Fauna, and Merryweather, and mischievous “ravens” who fly around Maleficent, waiting to do her bidding.

Festival of Fantasy is a 12-minute parade performed daily at Walt Disney World’s Magic Kingdom Park. The show is a tribute to Fantasyland and highlights new and classic Disney and Pixar stories. Featuring nearly 100 performers, the parade includes characters from films such as  “Peter Pan,” “Cinderella,” “Frozen,” “Tangled,” and of course, “Sleeping Beauty.”

Be sure to check the Times Guide at Magic Kingdom Park for the parade schedule. The show is subject to cancellation due to inclement weather.

To celebrate her return, Magic Kingdom is bringing back a fan-favorite treat from the Halloween season. The Maleficent cone, with lime soft serve in a black waffle cone, debuts today at Storybook Treats in Fantasyland. It’s available for a limited time while supplies last.

Maleficent fans can also find a variety of merchandise inspired by the Disney Villain throughout Walt Disney World. Find Maleficent apparel at Sir Mickey’s and The Emporium at Magic Kingdom Park. Disney Ears, featuring her signature horns, can be found at millinery shops like Le Chapeau at Magic Kingdom Park and Celebrity 5 and 10 at Disney’s Hollywood Studios. At Disney Springs, look for an array of souvenirs at Disney Style, ornaments at Disney’s Days of Christmas shop and pins at Disney’s pin traders.

Don’t miss Maleficent in all her fire-breathing glory on your next visit to Walt Disney World!