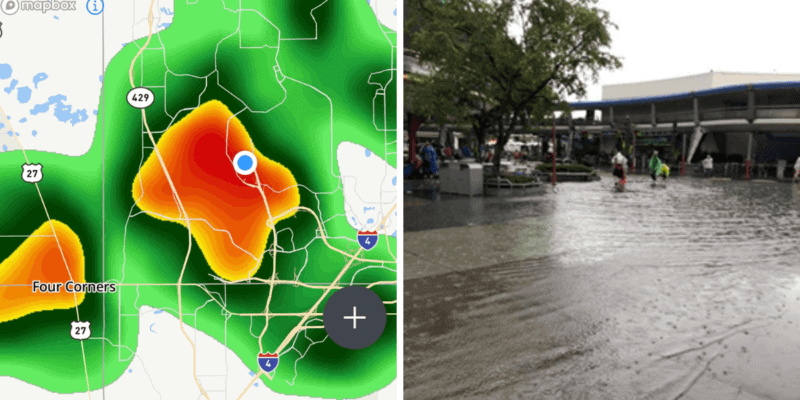 Walt Disney World Resort was hit with torrential rain today which caused instances of flooding throughout the park, especially in Tomorrowland.

We have even heard reports that flooding has seeped into the queues to attractions such as Space Mountain.

Despite these reports, the attraction remained fully operational, though other attractions in the area like the Tomorrowland Speedway closed due to the storm.

Tomorrowland Speedway has been reopened after an interruption of 95 minutes. https://t.co/nYRwKSMCfY #MagicKingdom #WDW #WaltDisneyWorld #DisneyWorld

But that is reported to not be the case for the other half of the park.

Half of Magic Kingdom is closed at the moment. This is an intense storm. #DisneyWorld pic.twitter.com/I3N0S8KcNR

This torrential downpour comes the day before all four Disney World theme parks are expected to be at capacity for the first time since their reopening as all park pass reservations for Annual Passholders, Disney Resort Guests, and theme park ticket holders are completely booked for Saturday, September 5 at Magic Kingdom, EPCOT, Disney’s Animal Kingdom and Disney’s Hollywood Studios.

But according to Weather.com, weather tomorrow should be typical of any Disney day with a high of 91 degrees Fahrenheit and a low of 76. Only a 20% chance of rain but they are not ruling out the possibility or a stray thunderstorm rolling in.

Guests should also be aware that the UV Index is supposed to be a level 10. We strongly recommend that you do your best to stay covered, shaded, and keep applying sunscreen to protect yourselves.

Are you or is anybody you know experiencing the downpour at the Walt Disney World Resort right now? What’s it like? Does this rainstorm deter you from going to the parks tomorrow or anytime this weekend? Let us know in the comments!