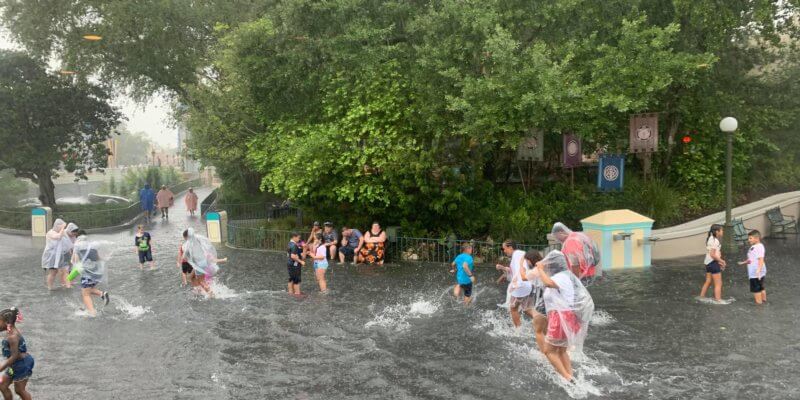 Summertime at Walt Disney World consists of lots of sun, but also several thunderstorms and random pop-up showers. Sometimes these rain showers can even turn into torrential downpours, which could really change the trajectory of your day at times as select Disney World attractions may close due to the rain.

Though this could cause frustrations, please remember that this is not Disney’s nor the Cast Member’s fault — even though some may think that.

It’s true — there is a myth that Disney is in a bubble and can actually control the weather. And yes, many believe it.

But we are here to debunk this myth as Disney World is not located inside a bubble and if there is rain in the forecast, there is nothing that Cast Members can do to stop it.

For years, the myth of Disney World being located inside a dome has made many believe that they can also control the weather, meaning if there was a rain shower in the forecast, Disney could stop the rain from hitting the Parks (thanks to the dome).

This sounds somewhat insane, but there are, in fact, some people who believe this, and we are here to tell you that this is absolutely not true and Disney can not control the weather. And Disney World is not located inside a dome.

So, if you have an upcoming vacation, be prepared to not only bring ponchos and extra clothes as the rainstorms in Orlando during the summer months can come on suddenly.

Have you ever heard of this myth before? Did you think Disney World was located inside of a dome? Let us know in the comments below.

Comments Off on “Turn Off the Rain” – Does Disney Actually Control the Weather?