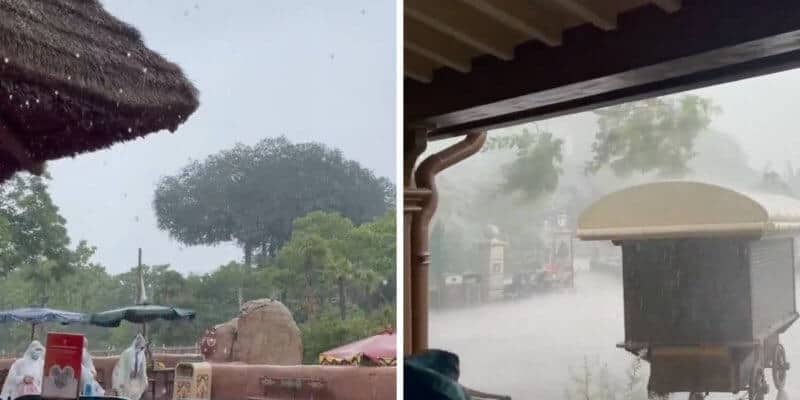 The Disney Parks are filled with one-of-a-kind attractions, experiences, and magical moments that create memories for Guests. However, because the theme parks are located outside, it is important to keep in mind that Mother Nature may become a factor in planning your day as rainstorms and other weather-related incidents will pop up occasionally.

In fact, on a recent trip to Magic Kingdom at Walt Disney World, the Florida rain caused parts of Magic Kingdom to become so flooded, that it was nearly a water park! Kids were seen legitimately splashing around throughout the walkways as if they were at Typhoon Lagoon.

Now, the storms are being seen in yet another Disney Park — Disneyland Paris.

DLP Report took to Twitter recently to share a video of a flash storm at Disneyland Paris, in which you can see the heavy rain pouring down on Guests in the theme park. If you look closely at the walkways in the video below, it is clear that the heavy rain is causing some flooding.

This wasn’t the only storm yesterday, as DLP Report also Tweeted earlier that morning a video of the rain coming down as Guests try to get to their preferred destination:

Another day another flash storm ⛈

Another day another flash storm ⛈ pic.twitter.com/btVbxh7LAb

It is important to keep in mind that having a stormy day at the parks could really change the trajectory of your day at times as select Disney Parks attractions may close due to the rain. With this being said, there are many attractions at the theme parks located indoors that Guests can enjoy while they wait out the storm.

Have you ever witnessed flooding at any of the Disney theme parks? Let us know in the comments below.