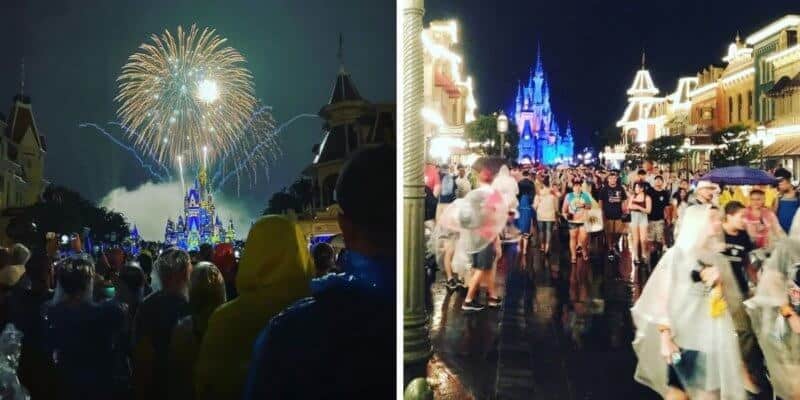 Last night, there were tears, there were crowds, and there was a torrential downpour for the reopening night of Happily Ever After at Magic Kingdom in Walt Disney World.

True Disney fans stood out on Main Street, U.S.A. in a complete downpour to witness the monumental moment of Angie Keilhauer and Jordan Fisher coming over the loudspeakers and belting out Happily Ever After as fireworks light up the night sky.

Fireworks have not been hosted at Disney World for over one year due to the ongoing pandemic, but this changed on July 1 as both Happily Ever After and EPCOT Forever were set off in the theme parks.

At approximately 7 p.m., we entered Magic Kingdom and noticed people were already claiming their spots for the fireworks, which debuted at 9:15 p.m., as seen in the image above.

But as we got closer to fireworks time, more and more Guests packed into the hub and all the way down Main Street, U.S.A.

BBBrooke (@bbbrooke__) posted a photo last night before Happily Ever After began, where you can clearly see the crowds gather around Cinderella Castle.

Reach out & find your happily ever afterrr…!!??

This was the best post show pic we could get ? I soaked in (literally) every last second of tonight!!! Dancing and crying & feeling the feels! I am so, so, so happy fireworks are back!! If you joined live tonight – thank Tommy he filmed so I could dance & cry!! Goodnight, friends!!!❤️??✨?

And Kristin L. (@kristinlinekin) posted a photo of Cinderella Castle where you can see Guests packed into the hub:

Disney Guest Felix Z. took to Instagram to share a selfied with several Guests behind him — It is clear the rain did not keep people away!

Firework show in the monsooning rain? Are we nuts? ?

Erica R. (@healthydoseofdisney) posted the following image as she stood towards the back of Main Street, U.S.A. watching Happily Ever After.

A post shared by Healthy Dose Of Disney ? (@healthydoseofdisney)

Dewayne B. (@dbevil) stuck around after the fireworks ended to witness the crowds leaving Magic Kingdom — And as he points out, this is something that hasn’t been done in 473 days:

Looking up and down Main Street, post fireworks, for the first time in 473 days

Karen C. (@kcole2112) also stuck around and posted a photo of the post-fireworks crowds:

The crowds leaving WDW after the fireworks ??

It’s safe to say Disney fans have been anxiously awaiting for fireworks to return to Disney World. EPCOT Forever also returned last night at EPCOT prior to the debut of HarmonioUS on October 1, 2021. Also debuting on Disney World’s 50th anniversary is Disney Enchantment at Magic Kingdom.

Are you happy to see fireworks return to Disney World? Are you going to visit in the near future? Let us know in the comments below.

If you want to visit Disney World to see fireworks on your next vacation, start planning today!