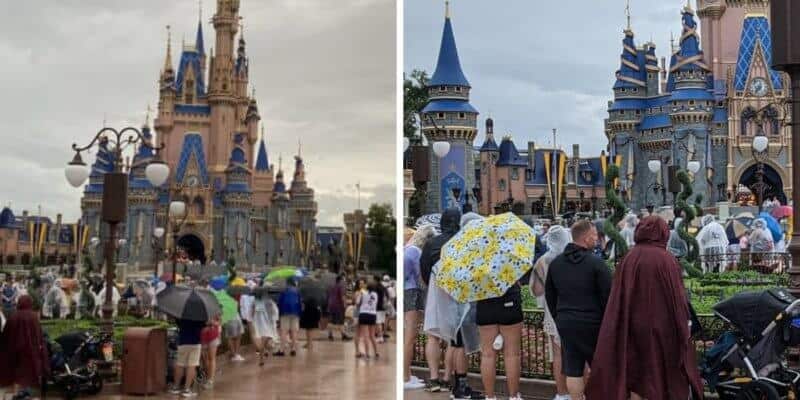 Both Images: Credit: Inside the Magic

Walt Disney World is officially bringing back nighttime spectaculars TONIGHT after over one full year. Both Happily Ever After at Magic Kingdom and EPCOT Forever at EPCOT will once again light up the night sky starting tonight, July 1, 2021.

Inside the Magic has team members inside Magic Kingdom tonight to witness this monumental moment and it’s safe to say, Disney World Guests cannot wait to once again see Happily Ever After as Guests are crowding Cinderella Castle hours before the debut.

The theme park was prepared for the number of Guests coming into Magic Kingdom as barricades were set up at the front of the park to help with crowd control.

Once inside the theme park, we noticed Guests were already grabbing spots in the hub area over two hours prior to the fireworks scheduled time — even in the pouring rain! (Talk about dedication!)

Disney CEO Bob Chapek confirmed that the theme parks have already started increasing capacity again, which you can read more about here. At this time, we do not know exactly what percentage of capacity Disney World is operating at, but we know it is higher than 35%. Therefore, if you are planning on seeing the fireworks in the near future, expect crowds and be patient.

Happily Ever After will officially debut at 9:15 p.m. at Magic Kingdom. EPCOT is also bringing back fireworks tonight with the return of EPCOT Forever at 10 p.m.

Disney’s Animal Kingdom will also be getting a new daytime show, which you can read more about here.

Are you excited to see fireworks return to Walt Disney World? Let us know in the comments below.

Do you want to start planning your magical Disney World vacation and see fireworks once again? Click here to for a free quote!