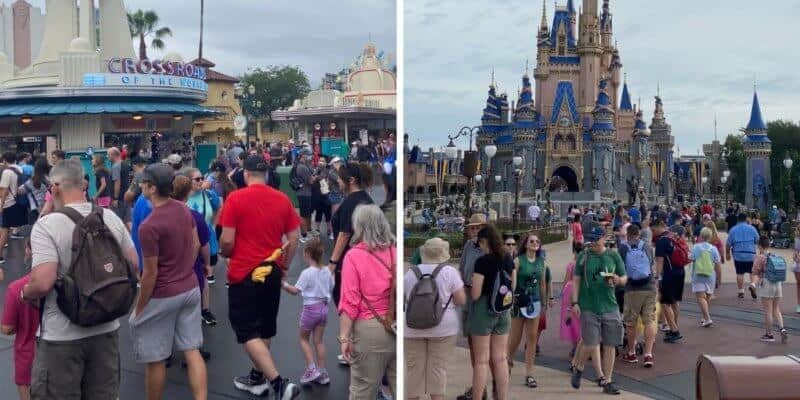 Summer crowds have officially arrived at Disney World as the theme parks welcomed large crowds this past week.

Just a few days ago, I was visiting Walt Disney World, and it was very clear that summer crowds have arrived. Here is what I experienced at each of the theme parks.

On Saturday, July 12, I went to Animal Kingdom, and not only was there an initial morning crowd rush, but the crowds were clear throughout the entire Park for the duration of the day. Now, I know it was a Saturday and weekends tend to be busier as Florida locals also visit the theme parks during this time, but it seems as though these crowds were more than just locals.

We entered the Park approximately an hour after Park opening, and it is clear in the photo above that Guests were still piling in.

Later in the afternoon, around 2 p.m., I headed into Pandora and there were Guests around every corner. Some were lined up to ride Na’vi River Journey while others were in the queue for Avatar Flight of Passage.

There were also Guests lined up for PhotoPass pictures, to grab and snack, and just standing around enjoying the theme park.

Over at DinoLand, U.S.A., once again, Guests were spread across the walkways trying to either enter or leave this section of the Park.

I spent the entire Saturday at Animal Kingdom and found the crowds were steady throughout.

Additionally, on Monday, June 14 I headed back to Animal Kingdom and found the same level of crowds as I did on a Saturday. As seen in the image above, again, crowds of Guests poured into the theme park even an hour after Park opening.

And over in Asia, Guests were spread across the walkway trying to get to their preferred destination, whether that be riding Expedition Everest, or visiting the Thirsty River Bar.

On Sunday, June 13, I went to EPCOT to check out the Flower and Garden Festival. Despite torrential downpours throughout the afternoon, Guests still spent the day inside the theme park trying to soak up as much magic as possible.

The queue for Test Track wrapped around several times outside and even needed an extended portion further away from the ride entrance to accommodate the crowds. You can see this in the images above.

These crowds were also seen in World Showcase, specifically for the Frozen Ever After queue as after the storms passed, Guests were lined up into the China pavilion to try and ride the attraction.

On Tuesday, June 15 I headed over to Disney’s Hollywood Studios, and it’s safe to say this felt like the most crowded Park. This doesn’t come as a surprise as Hollywood Studios is almost always the first Park to book up with Park Pass reservations due to the demand of Galaxy’s Edge and Toy Story Land.

I arrived before Park opening and Cast Members let Guests into the theme park approximately 30 minutes early. In both the images above and below, you can see the initial rush pour into Hollywood Studios.

However, it wasn’t just the initial rush of Guests that formed crowds. I attended one of the showings for the show For the First Time in Forever: A Frozen Sing-Along Celebration, and it was a packed audience. As seen in the image below, almost every seat in the theater was taken.

And of course, Star Wars: Galaxy’s Edge drew in a ton of Guests as they were eager to ride Millennium Falcon – Smugglers Run or Rise of the Resistance (if they were able to snag a boarding group).

In the image above, you can see a ton of Guests roaming around trying to get to their preferred destination.

Overall, I felt as though Hollywood Studios was easily the most crowded theme park out of the five days I visited Walt Disney World.

On Wednesday, June 16 I headed over to Magic Kingdom where, initially, crowds took over Main Street, U.S.A., but as the day went on, it felt a lot less packed.

In the images above, you can see Guests entering the theme park as well as scattered throughout the central hub about an hour after Park opening.

The first place I headed to was Liberty Square so I could ride Haunted Mansion. It was a walk-on and the entire section of the theme park was dead. However, afterward, I went into Tomorrowland where the crowds were almost unbearable.

In the image above, you can see in the distance that there are several Guests taking over the walkway. Honestly, the crowds made it hard to walk through, but once I got to the other side of Tomorrowland, it cleared up a bit.

All in all, it is clear that summer crowds gave arrived in Disney World as people cannot wait to once again soak up the magic of the theme parks as we continue to move forward with the pandemic.

If you want to visit Disney World on your next vacation, be prepared to experience crowds and stay hydrated as the Florida heat is in full swing.

Do you want to start planning your magical Disney World vacation? Click here to for a free quote!