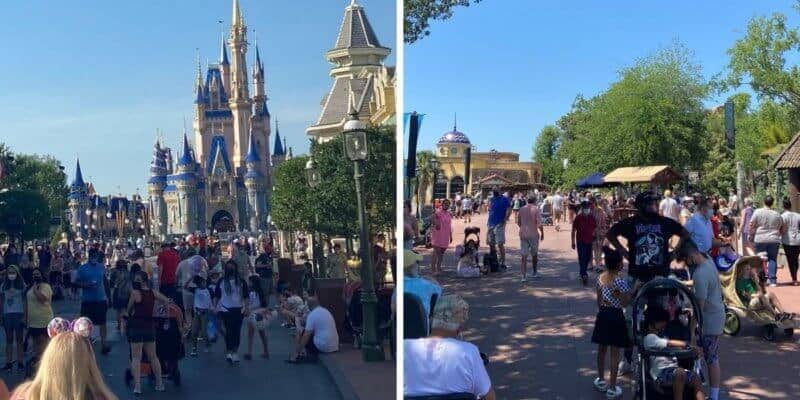 Walt Disney World is one of the most visited places in the world. It’s no secret that families come from across the globe just to step foot on Main Street, U.S.A., get a close-up view of Cinderella Castle, and ride Pirates of the Caribbean, Haunted Mansion, Splash Mountain, and other popular attractions.

But, with this being said, crowd levels can vary depending on the time of year you visit. Two of the most popular times Guests go to Walt Disney World are spring break and Easter weekend, which we saw reflected in crowds that poured into the parks nearly every day over the past month or so.

Related: Disney World Crowds Before and After the Holidays

Now that Easter weekend and spring break are behind us, we were curious how crowd levels were in the theme parks now. When visiting EPCOT earlier in the week, we saw a slow start to the day, but crowds picked up as we got further into the afternoon.

In this first photo below, taken at park opening, you can see World Showcase was pretty empty.

However, as we approached mid-afternoon, Guests began making their way into World Showcase and the pavilions saw an increase in crowds.

Additionally, the line for Frozen Ever After stretched into multiple pavilions, as seen in the photos below.

We hopped over to Magic Kingdom to check out what was happening in that theme park and we found that as we entered, around 5:30 p.m., the crowds were fairly thick.

But, as the night went on, and by the time we headed out of the theme park, you could certainly see the crowd levels die down, as seen in the photos below.

The following day, we visited Disney’s Hollywood Studios, where we also found that depending on the time of day and the area of the theme park, crowd levels varied.

Heading into Toy Story Land, it’s no surprise Guests were pouring in as they were eager to check out Slinky Dog Dash, Toy Story Mania, and Alien Swirling Saucers.

At Star Wars: Galaxy’s Edge, we saw the crowds really vary depending on the time of day. You can see in the photo below, taken at approximately 10 a.m., there were some groups gathered around as they waited for their boarding group to be called for Rise of the Resistance.

However, with this being said, it really wasn’t unbearably crowded and everyone remained — for the most part — socially distanced.

At this time, Walt Disney World is still operating at a limited capacity of 35%, and the company has not announced plans to raise capacity yet.

If you plan to visit a Disney World theme park, it is important to know that you must need valid admission as well as a Park Pass. In case you aren’t familiar with the Park Pass system, Disney World implemented it in July 2020 when the theme parks reopened to Guests. It is designed to help keep track of demand and ensure that limited capacity was enforced.

The Park Pass system requires those who wish to visit a Walt Disney World theme park — Magic Kingdom, Disney’s Hollywood Studios, EPCOT, or Disney’s Animal Kingdom — to have both a valid ticket and a reservation for the park they wish to visit on a specific day. For more information, visit Walt Disney World’s official website here.