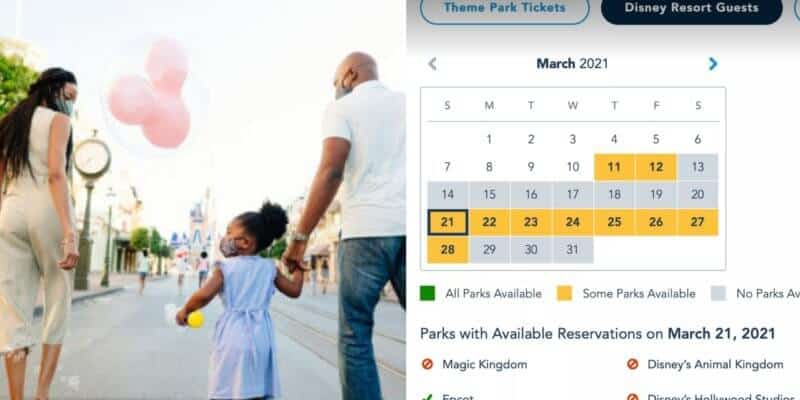 That being said, it seems that spring break has been a busy time for Disney World with Guests filling up almost all available slots at Disney World, with only a few options left as of the end of the month. If we take a look at Disney’s Park Pass availability calendar, we can see that after March 20, there are only a few dates remaining that have Disney Park Pass availability.

For Theme Park Tickets, between March 21-24, all parks are booked except EPCOT (see screenshot below).

But from March 25-27, both EPCOT and Animal Kingdom are currently available for theme park ticket holders (see screenshot below).

For Resort Guests, from March 21-24, all theme parks are currently booked except EPCOT (see screenshot below).

And between March 25-27, both EPCOT and Disney’s Animal Kingdom are the only two options currently available (see screenshot below).

It seems that Annual Passholder’s actually have some better odds in snagging a Disney Park Pass of their choice for the end of this month! On March 21, all parks are currently booked except for EPCOT. Between March 22-23, Magic Kingdom, EPCOT and Animal Kingdom are all available, leaving only Disney’s Hollywood Studios being booked (see screenshot below).

But then if we look at March 24-31, we see all parks currently open for Annual Passholders, which is a rare sight to see (see screenshot below)! It is clear from these photos that the majority of Guests are tourists at the moment, which makes sense due to spring break.

So, if you are a Guest looking to make a Disney Park Pass reservation, booking earlier would be your best bet. Considering spring break is leaving the majority of days in March fully booked up, taking the initiative now to organize your park days will help avoid disappointment.

Over at Disneyland Resort, with A Touch of Disney special event being sold out, it seems that both coasts are seeing an influx of Guests on a Disney vacation this spring break.

For most up-to-date information on Park Pass availability, be sure to check the calendar on Disney World’s website here.

Will you be heading to Disney World throughout the month of March? Do you have your Disney Park Passes yet?

If you want to book a trip to Orlando and experience sunny Central Florida, why not take a visit to the Walt Disney World Resort? With Mickey Mouse and Minnie Mouse awaiting your arrival and the 50th-Anniversary celebrations around the corner, the parks are getting even more magical! Click here to get started today, and you will be on your way to Cinderella Castle!

Comments Off on Spring Break Clears Disney Park Passes, Only A Few Left!