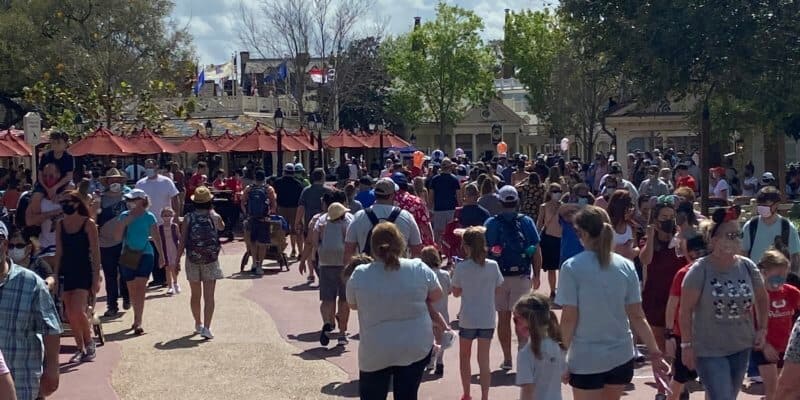 Walt Disney World is one of the most popular vacation spots in the world. It’s no secret that Guests come from all over just to step foot on Main Street, U.S.A., and get a close-up view of Cinderella Castle in Magic Kingdom.

And as we get further into 2021 and as we are in the midst of spring break, more and more people are beginning to visit the theme parks again.

In fact, Central Florida is beginning to draw tourists once again as families are eager to return during the first spring break season since the ongoing pandemic began. Last year, spring break was nearly entirely canceled due to the start of the coronavirus pandemic in the Untied States. So, as the economy begins to slowly recover and COVID-19 cases begin to dwindle thanks to the vaccine, families are taking advantage of 2021’s spring break.

However, with this being said, crowds are becoming the new norm, especially at the Florida theme parks, which is a concern to some.

Alvina Chu, epidemiology program manager at the Florida Department of Health in Orange County, told Orlando Sentinel, “Since we’re in a pandemic, I do have concerns about COVID spread and Central Florida, which is why even for visitors and residents, we still urge the pandemic precautions while we try to build this immunity in our community.”

Inside the Magic fan, Marla D., also expressed their concerns with the current spring break crowd levels, saying “There is no social distancing. People are packed in there like sardines […]”.

Another ITM reader, Grace P. said the spring break crowds were alarming to her and her family as well, writing “I’m going next week. Increased crowds concern me because of long lines. But on the other hand, I went last August and it’s just weird being in Disney without a lot of people.”

And Peter G., shared his insight on a recent Inside the Magic article, writing “Heading to WDW the week after Easter Sunday. We are concerned that it will be crowded. 1h wait times are pretty bad, and no fast pass option.”

Additionally, Orlando Sentinel stated that Disney has a 17% increase in traffic on its planDisney website compared to 2020. This seems to show that more families are thinking about vacations as we near the hopeful end of the current pandemic.

This is no surprise as Park Passes for Walt Disney World’s theme parks — Magic Kingdom, Disney’s Animal Kingdom, Disney’s Hollywood Studios, and EPCOT — are already sold out for a majority of March and even certain days in April.

Orlando Sentinel reached out to Disney for comments regarding spring break attendance, but the company declined to answer. However, spokeswoman Erica Ettori said in a statement, “We are encouraged by what our guests are telling us about the experiences in our parks and resorts with our focus on health and safety. With the power of our brand and the magic of our cast members, we remain optimistic that even better days are ahead.”

In fact, Inside the Magic reader Janet P. shared that on her recent visit to Walt Disney World, she still had a great time, even though it’s different than before the pandemic hit. “I was there 1/22 – 1/26. Incredible experience. Sure it’s different but thoroughly enjoyed myself,” Janet said.

She continued, “Thanks for all the attention to safety detail and still love hearing, Welcome Home every time I scanned my Magic Band. Even with COVID restrictions still managed to do all 4 parks in one day. Our first park on Saturday was Hollywood Studios and before 11:00 am we had completed 6 rides.”

Another Inside the Magic follower, Marie, shared with us that Cast Members have been very aware and enforcing the safety protocols, saying “I have an incredible time and I love the way Cast Members are Very Attentive to guests and asking them to comply, unlike other theme parks I have visited.”

Aszkara, another Inside the Magic reader and follower, said that one of her favorite things to do at the theme parks now is watching the pop-up character cavalcades! She said, “It’s definitely different, but I honestly had an amazing time. The lines looked A LOT longer than they actually were, and even the wait times posted were longer than the actual waits for almost everything. My favorite new/different thing was the random character cavalcades. So fun!”

“We’re the little dog here. We run around the big dogs’ feet trying to pick up crumbs. And they don’t let many crumbs drop, that’s for sure,” McHugh told Orlando Sentinel. “But when they’re having these capacity limits that they are, that works out great for the smaller attractions because people are looking for something else to do.”

It’s not just Disney World that is drawing in the crowds. Universal Orlando’s theme parks have both regularly hit the maximum of their limited capacity in the past few weeks.

And at Legoland, the hotels have seen an increase in occupancy. In fact, it’s the highest its been since they reopened last year, which is a great thing, especially for employees. “We’ve been bringing employees back since we reopened on June 1,” Rex Jackson, Legoland Florida Resort’s general manager told Orlando Sentinel. “Currently, we are actually hiring for 225 positions, so we are eyes on the future.”

Orlando Sentinel also had the opportunity to speak to theme park analyst John Gerner, managing director of Virginia’s Leisure Business Advisors, who expressed that Disney is doing a great job operating amid the pandemic. “I think Disney is doing as good a job as you can expect,” Gerner said.

And Inside the Magic fan, LeAnna B., also explained how even though the parks look packed, they aren’t as bad as they seem, “Just got back yesterday from our week long trip,” LeAnna wrote. “As crowded as it looks, it only took us 20 minutes to get out of the park each day! In fact we got on the 1st ferry boat each night we were in magic kingdom. Now that never happens!! It’s because all of the line queues are outside. By the time you get the line inside the building you are going very quickly onto the ride.”

On the flip side, theme park analyst John Gerner also expressed how it can be difficult to eliminate all the problems, including face masks and social distancing issues. “People aren’t paying attention to it,” Gerner told Orlando Sentinel. “You’re giving people instructions on what to do even when it’s in their own interest is always going to be a challenge when people are just there wanting a good time and they’re just not thinking straight.”

Inside the Magic fan, Joan, also noticed this, explaining that on their recent trip, though many were following the rules, there were a select few who did not listen. “The rules are stated clearly and I agree that if you don’t want to wear a mask all day, don’t go,” Joan wrote. “I saw a couple of instances of photos being taken with masks off, and one entire family eating while waiting in line, but generally people kept their masks on.”

She continued, “What I had an issue with was people not distancing properly. I am an older person and don’t walk as fast as some people. I experienced many instances of patrons walking up from behind and practically breathing down my neck, forcing me to step aside to prevent exposure. People really don’t understand the social distancing rules.”

Do you have plans to visit Central Florida? What theme parks are you planning to visit? Let us know in the comments below.