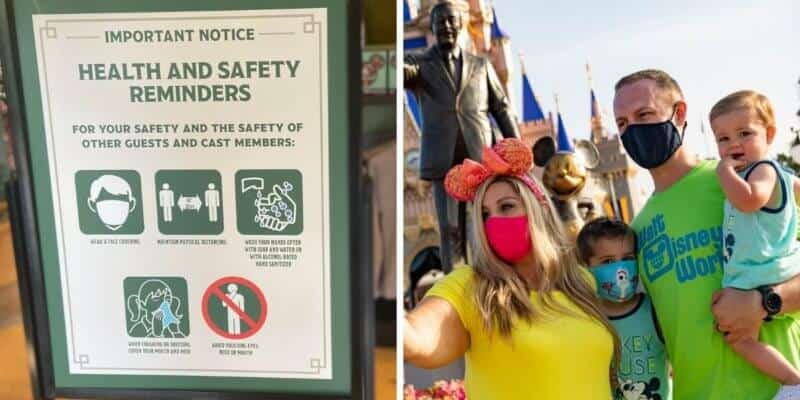 When Walt Disney World and Universal Orlando reopened to Guests over the summer, they implemented several new health and safety rules — including the requirement of wearing a proper face covering. These rules have been implemented to keep both Guests and Cast Members/Team Members safe while visiting the Orlando theme parks.

However, it seems as though Guests are continuing to fight this rule at both Universal Orlando and Walt Disney World.

According to Orlando Sentinel, fights are continuing to occur over the face mask rules at Orlando theme parks. “At Universal, two women shoved and punched each other in line at Revenge of the Mummy over how fast the socially distanced line was moving and if it was maintaining six feet of space,” they reported. “At one point during the skirmish, one woman coughed in the other’s face, according to an Orlando Police report, which said officers couldn’t determine who was the primary aggressor during the Sept. 12 incident.”

“The overwhelming majority of our guests have been great,’ Universal spokesman Tom Schroder told Orlando Sentinel. “They understand the need, support us by doing their part and tell us they feel comfortable while in our parks.”

Over at Walt Disney World, Orlando Sentinel reports that an elderly Hollywood Studios Guest argued with and was then attacked by two strangers from a larger family group. The family was not all wearing masks. The Orlando Sentinel reports that the Guests were seen maskless “after they took shelter from the rain by the bathrooms near the Rock ‘n’ Roller Coaster, according to an Orange County Sheriff’s Office report.”

Per the report, one man punched the senior in the head, and then a woman from the family joined in, hitting the victim after he fell on the ground. The Guest, who was at least 65 years old, was not seriously hurt, according to the report, and the large family left the park before the sheriff’s office could arrest anyone. This incident occurred on September 17, 2020.

Back in August, an Orlando man was arrested for attacking, hitting and threatening to kill an EPCOT security guard who enforced the mask policy.

And in September 2020, one Guest was escorted out of Disney’s Hollywood Studios as he was shouting and incorrectly quoting Disney-Pixar’s A Bug’s Life to try and get other Guests to take their masks off with him. You can read more about this incident here.

Most recently, as of 2021, Orlando Sentinel reported that a security guard near Contemporary Resort was assaulted after enforcing the face mask policy.

The security guard at the Disney Resort hotel reminded the Guest to put on his mask before he entered the resort in February 2021. The Guest refused and then spat on the guard’s forehead.

“There’s never a day when I don’t have a story,” said one employee whose regular job was upended during the pandemic so she took a new assignment enforcing mask rules in the Disney Springs parking garages. “I cried the first week I started. It was not a good time at all. Imagine going to work every single day where people ridicule you.”

People get angry because they can’t wear a gaiter mask or don’t understand why Disney has mask requirements when the state of Florida does not, the employee said. She asked not to be identified over concerns about losing her job.

“I’ve had a guest literally get right up in my face and literally curse me out,” she said.

She was scared she was going to get punched if her supervisor hadn’t been there, she said.

“If I honestly didn’t have good coworkers, I would have already quit by now,” she said.

We want to remind everyone that it is part of Walt Disney World rules to wear a face covering, comply with social distancing protocols, as well as follow other safety measures currently put in place during this unprecedented time. In order to operate safely during the pandemic, Disney World put these rules in place (which coincide with the CDC Guidelines) to keep both Guests and Cast Members as safe as possible.

Not Everyone Fights Over Mask Rules

On the flip side, these incidents are not the norm for a majority of theme park Guests, and not every Guest gives Cast Members and security a hard time. According to the Orlando Sentinel in 2020, Disney employee Jocelyn Lagor, who drives the Kilimanjaro Safari trucks at Disney’s Animal Kingdom, said her expectations have been exceeded by Guests who follow the rules.

“I would definitely say it’s been surprisingly easier than I imagined,” Lagor told Orlando Sentinel.

And recently over in EPCOT, park General Manager Kartika Rodriguez, reminded a man, who had just finished his beer and got up to walk around, to pull his up his mask before leaving the area. The Guest apologized and then proceeded to pull his mask up.

“Body language is just as important as ever to communicate with our guests,” Swisher said. “We always lead with empathy.”

And more recently, in the March 4, 2021 article by Orlando Sentenial, Disney representative Andrea Finger explained that “most of the visitors who returned to the parks since the pandemic reopening are supportive of the safety rules”, which is great to hear.

Again, if you are planning to visit a public place, such as Walt Disney World Resort, please remember to practice safety and health protocols in order to keep yourself and others safe during this time. Keep your distance from other Guests, wear your appropriate face coverings at all required times, wash your hands often, try to use paperless payment methods, and cover your mouth and nose while sneezing or coughing.

Face coverings are required for all Guests (ages 2 and up) and Cast Members, including those who have received a COVID-19 vaccine. Please bring your own face coverings and wear them at all times, except when dining or swimming. You may remove your face covering while actively eating or drinking, but you must be stationary and maintain appropriate physical distancing.

Find up-to-date information on COVID-19 and face masks on the official website for the Centers For Disease Control and Prevention (CDC).

This article has since been updated to reflect the most up-to-date information.