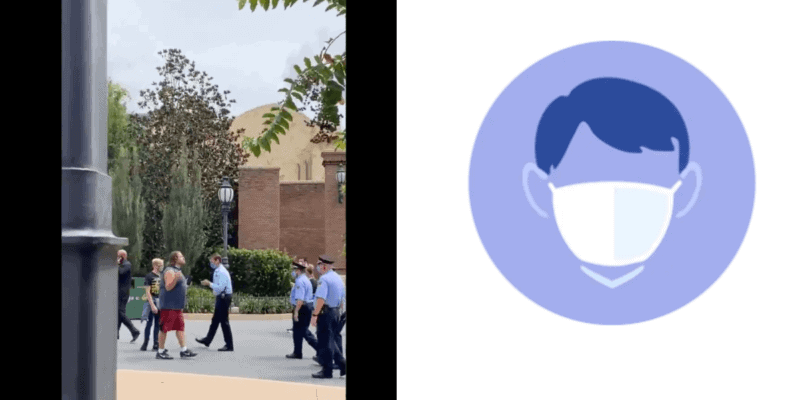 One Guest appears to have attempted to revolt against that mandate and was escorted out of Disney’s Hollywood Studios shouting to anybody who would listen to take off their masks with him. Trying to empathize with his audience, the man in question appears to be incorrectly quoting Disney-Pixar’s A Bug’s Life to prove his point. Since this article’s publication, we have continued to follow the story and have since updated this article with more information.

This news was shared by @yourWDWguy who posted a short video to Twitter with the caption posted below. Since then, the video has been taken down.

I cant stop watching this.

“HAVE YOU EVER SEEN A BUGS LIFE? Remember Hopper?!”#DHS #WDW pic.twitter.com/SH8pi8fD0M

While the incident was occurring, the man went live on social media. After Disney trespassed him and he exited the park, he continued to share more about his experience, making numerous claims, and incorrectly citing the Americans with Disabilities Act (ADA) and the HIPAA privacy act.

This is not the first time Disney World Cast Members and would-be Guests have clashed over the face mask policy at a Disney Park. Several weeks ago, we at Inside the Magic shared a story about a family being refused access to the Magic Kingdom because a little girl who has autism was not wearing a mask.

What is interesting about today’s situation, however, is that in order for this man to have been granted access to the theme park, he would have had to have been seen wearing a face mask of his own. So after he already complied, he presumably decided to remove the mask. However, at this time we do not know the full context of what occurred before Disney decided to escort the Guest out of the theme park.

When it comes to its face-covering mandate, the Walt Disney World Resort clearly states the following:

Disney reserves the right to deny entry or require Guests to leave the theme parks, as they are private property. You can view the Walt Disney World Resort official Guest rules here.