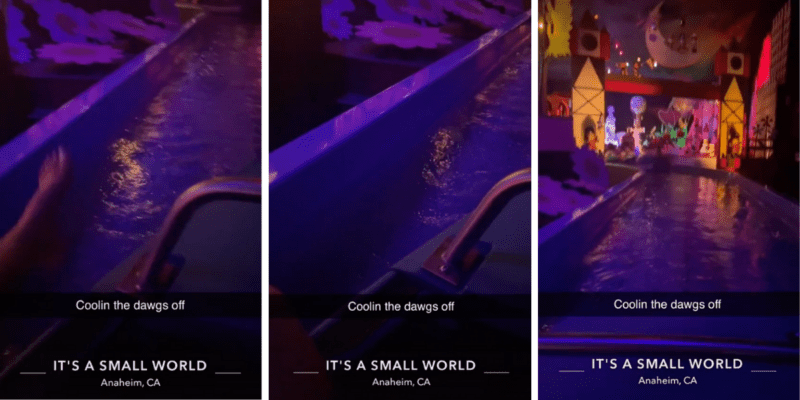 Just yesterday, we reported on a rising TikTok trend in which Guests stick their feet into the water on the “it’s a small world” boat ride at Disneyland Park in Anaheim, California.

Before this week, the last recorded instances of this trend were in April, when two separate Guests dipped their toes in the water at Splash Mountain and “it’s a small world.”

Today, another Guest shared a video of themselves “coolin the dawgs off” at Disneyland Resort. @starburstyeeters on TikTok posted the video in which a Guest sticks their bare foot out of the boat and into the water during the indoor portion of “it’s a small world” at Disneyland Park:

As we previously reported, Referring to toes as the “dogs” or “dawgs” is a rising trend on TikTok. Now, it seems that trend has officially found its way to Disneyland Resort and inspiring multiple Guests to stick their feet outside of the “it’s a small world” ride vehicles.

When at Disneyland and Disney California Adventure, it’s important to keep your hands and feet inside ride vehicles at all times for your safety and the safety of others.

What’s the strangest thing you’ve ever seen another Guest do at a Disney Park? Let us know in the comments.

Comments Off on A New Trend After All, ANOTHER Guest Sticks Bare Foot In Ride Water