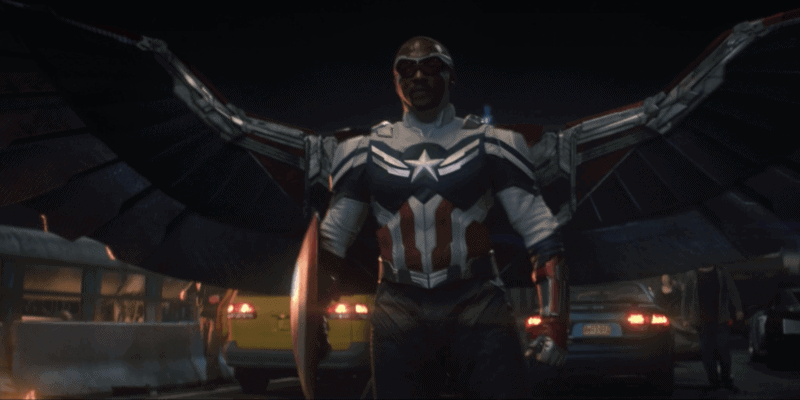 Marvel originally had some crazy ideas for how to make Anthony Mackie’s Sam Wilson different from  Steve Rogers’ Captain America but decided not to include them in Falcon and the Winter Soldier.

While fans are happy with how Sam Wilson’s Captain America looks, the character almost had some tech upgrades that would’ve made him way cooler than Steve Rogers’s Captain America. Sure, he can fly with his wings and throw a shield, but Sam Wilson was also going to be able to create some energy shields while using the Captain America shield.

In Marvel’s The Falcon and the Winter Soldier: The Art of the Series, development concept illustrator Wesley Burt revealed that the original designs for Captain America were going to include a lot of tech upgrades inspired by the Border Tribe shown in Black Panther (2018).

These upgrades included an energy dome and a lot of different variations that were similar to the border tribe:

“Ryan [Meinerding] asked some of the [Visual Development] department to take a little bit of time and think up some new ways that Sam could use the shield, more specific to him and his own physicality with it… when I was thinking about the tech rim piece, I was looking for a way to minimally add an element to the shield so as not to distract too much from the shield itself but still make it feel like it could have a believable tech addition and hint at the Wakandan upgrades before you see them used.”

Burt continues to share how the Border Tribe and other Wakandan technology played a massive role in figuring out what abilities Captain America would have in the series:

“I also just really wanted to think of other ways that could emphasize the defensive nature of the shield itself and not just look for new ways that it could be used as a weapon. I immediately thought of the various shield tech used by the Border Tribe and their blue cape shields, and also the big cloaking shield around Wakanda itself, as a jumping-off point for how it could be implemented here…”

It’s disappointing that many of these ideas were scrapped, but it’s possible that Captain America 4 could end up showing fans several of these abilities. As of right now, Captain America 4 doesn’t have a release date meaning that fans will have to patiently wait for Captain America to return to the big screen and hopefully see the character use some of these cool upgrades in the movie.