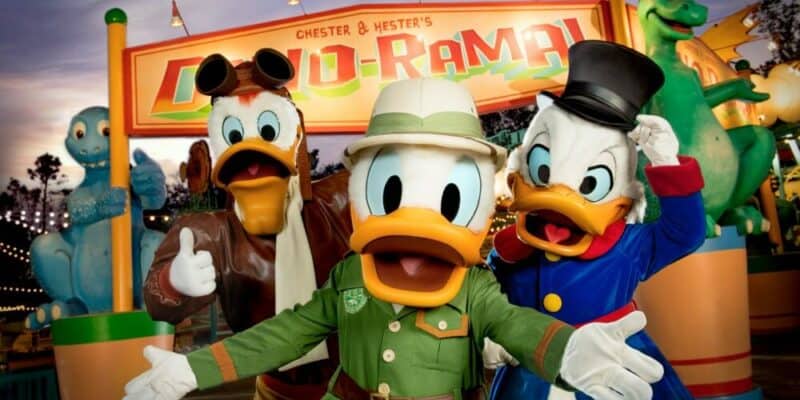 As Disney Parks properties around the world have loosened their COVID-19 protocols, including lifting face mask mandates, continuing construction on new rides and attractions — like Avengers Campus at Disneyland Paris and the Moana-inspired Journey of Water at EPCOT —  and dealing with summer crowds surges.

Chester and Hester were a couple that ran a small gas station in Diggs County before the arrival of the scientists studying the dinosaur fossils. When the town began getting more traffic, they converted the station into a dinosaur gift shop to attract more tourists, with a very distinct sense of humor. Though the Dino Institute has been trying to buy and raze the shop and the Dino-Rama park built in the shop’s parking lot, Chester and Hester’s heirs have been determined to keep the business going and offer a silly alternative to the more serious and educational offerings of their neighbors.

Related: Kali River Rapids Was Supposed to Have REAL Animals

When Primeval Whirl was demolished to create a seating area and Donald’s Dino-Bash! failed to return when Disney World reopened after its pandemic closure, many fans thought the area was in for a retheme — some even suggested that Raya and the Last Dragon (2021) characters and rides should take over the space.

The imminent return of Donald’s Dino-Bash! dance party, however, is confirmation that Disney World is committed to DinoLand USA, at least for the time being.

It is highly unlikely that executives would have decided to bring back the popular experience unless they planned for it to stay for a fairly significant amount of time.

If a retheme of DinoLand USA was going to happen in the immediate future, it seems that this particular meet and greet — which typically includes characters like Donald Duck, Daisy Duck, and Chip and Dale in dinosaur costumes — would have remained unavailable to Guests.

Meet Dino Donald Duck!
Donald Duck just heard the news—some of his feathered ancestors were dinosaurs! To mark this inquackable discovery, he’s transformed this land into a celebration for the ages.

An exact date for the family-friendly dance party’s return has not been announced.

Are you excited for the return of Donald’s Dino-Bash! soon?