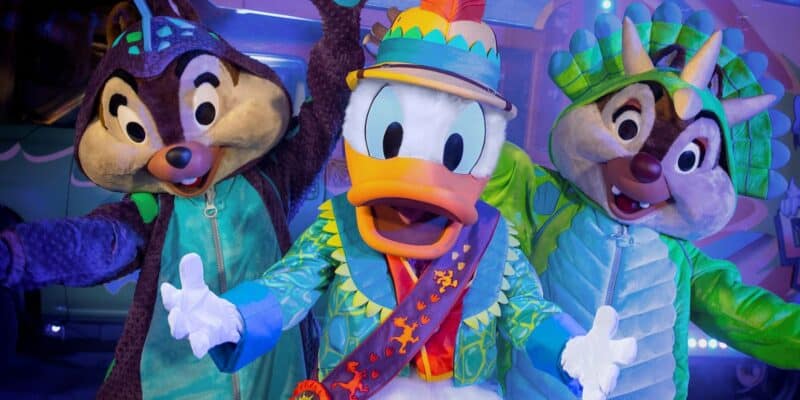 In the early 2000s, The Walt Disney Company was really pushing the “road side attraction” theming of DinoLand USA at Disney’s Animal Kingdom Park.

Chester and Hester were a couple that ran a small gas station in Diggs County before the arrival of the scientists studying the dinosaur fossils. When the town began getting more traffic, they converted the station into a dinosaur gift shop to attract more tourists, with a very distinct sense of humor. Though the Dino Institute has been trying to buy and raze the shop and the Dino-Rama park built in the shop’s parking lot, Chester and Hester’s heirs have been determined to keep the business going and offer a silly alternative to the more serious and educational offerings of their neighbors.

Now, a nostalgic Guest has uncovered a “terrifying” character who used to traipse around DinoLand USA in the early aughts. Reddit user u/istine posted:

Found a photo of my cousin at Dinoland USA/AK from ‘03…what exactly is she standing next to?

Found a photo of my cousin at Dinoland USA/AK from ‘03…what exactly is she standing next to? from WaltDisneyWorld

Related: We FINALLY Know What Demolished Primeval Whirl Is Being Turned Into

u/GraxonCAB was on the case, solving the mystery of precisely who this scary-looking Disney Parks character was — and it turns out she had a friend:

This was the female carnotarus walk around character for Chester and Hester’s Dino-Rama area. There was also a brown male character that would sometimes be out with her. This was back when they were trying to push the road-side attraction theming of the area, by making things look a little cheaper then you would expect from Disney.

Edit: After some searching I found out they were named Carnotaurus and Conniesaurus, this picture was their original design. Later in their life the costumes received a paint job that simulated scales on the costumes. It’s pretty rare to find pics of these guys but they are out there.

The OP responded, noting that they had looked up the updated versions of Carnotaurus and Conniesaurus and found them to be “way less terrifying.”

Although these characters haven’t been present at DinoLand USA for years, there have still been character meet and greets — specifically with Donald Duck and Chip and Dale (all wearing dinosaur-inspired costumes!) — available to Guests.

Related: The Tree of Life Will Soon Transform Into Something More Magical

Currently, however, Donald’s Dino-Bash! is unavailable. The character dance party is officially described as:

Meet Dino Donald Duck!
Donald Duck just heard the news—some of his feathered ancestors were dinosaurs! To mark this inquackable discovery, he’s transformed this land into a celebration for the ages.

Do you remember Carnotaurus and Conniesaurus at Disney’s Animal Kingdom?