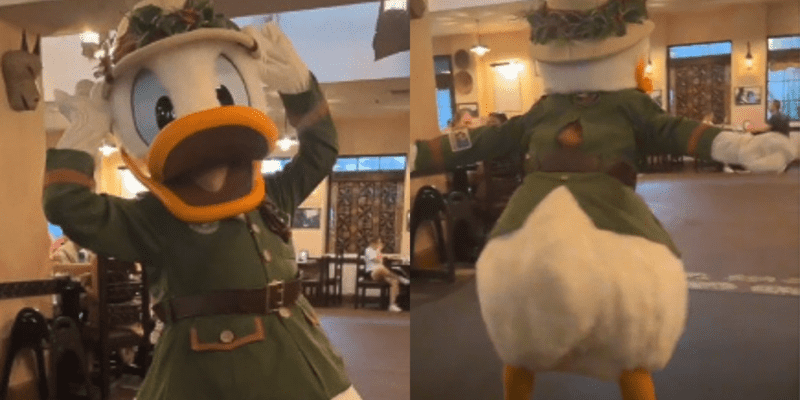 You never know what’s going to happen while interacting with characters at Walt Disney World Resort or Disneyland Resort.

Disney announced earlier this year that character meet and greets would be returning in a distanced fashion at select locations around Magic Kingdom, Disney’s Animal Kingdom, Disney’s Hollywood Studios, and EPCOT, and we’ve begun to see more and more consistent opportunities for Guests to meet with their favorite characters at both the Parks and the Resorts.

TikTok user Celeste Garcia (@celeste_ghood) shared a video of an interaction recently at Disney’s Animal Kingdom where she told Donald to “give me some shake.” Of course, Donald– who we all know loves to dance– had to show his moves. Donald is often known for shaking his tail feathers, so this is not uncommon, but a very fun interaction.

She wrote on TikTok:

In the video, the creator notes that the character is Daisy, which is actually incorrect as this is Donald Duck!

Disney character meet-and-greets have become more common over the course of this year and while they have not returned to complete normalcy, distanced interactions have still allowed Guests to experience the magic.

Disney says one of the best ways to meet characters is through dining reservations:

Theme parks are also home to attractions and entertainment that feature Disney Characters.

Plus, you never know who you might find when you visit the parks—check the printed Guidemap for additional Character Greeting locations.