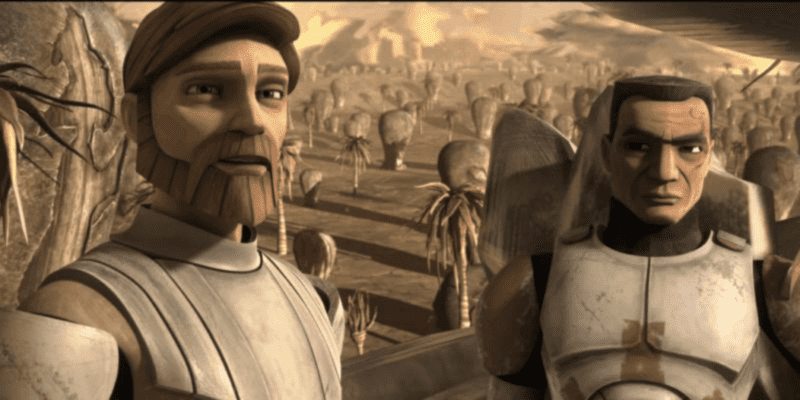 The Star Wars universe is expanding with The Bad Batch season two, but every Star Wars fan just noticed a jaw-dropping Clone Wars character in the official trailer.

In the official Bad Batch season two trailer, fans noticed the legendary Commander Cody at 0:33 and again at 0:43. Unlike the entirety of the Galactic Empire clone force, it appears that Commander Cody is trying to help Clone Force 99:

Commander Cody undoubtedly still has the inhibitor chip that forces him to execute all Jedi and remaining opponents of the Empire. Still, it’s evident in the small snippet of the trailer that he’s attempting to aid the Batch in some sort of firefight survival.

Other than Cody pulling out his Vibro knife to an unknown opponent, it’s plausible that his inhibitor chip malfunctioned, and he’s questioning the methods of the Galactic Empire and Palpatine or executing his orders and wiping out his “brothers” without another thought.

While Lucasfilm has not confirmed an official release date, The Bad Batch season two is confirmed to release in Fall 2022.

More about The Bad Batch

Star Wars: The Bad Batch is an animated television series that acts as both a sequel to and a spin-off of Star Wars: The Clone Wars. It focuses on the squad known as Clone Force 99 (an enhanced clone trooper squad). It was announced on July 13, 2020 and premiered on Disney+ on May 4, 2021. The first season has sixteen episodes, and its musical score was composed by Kevin Kiner, who previously worked on Star Wars: The Clone Wars and Star Wars Rebels.

Which other Clone Wars characters do you want in The Bad Batch? Comment below!

Comments Off on “He’s Finally Back,” ‘Star Wars’ Fan-Favorite Returns for ‘Bad Batch 2’